The concept of scarcity, where unlimited wants cannot be satisfied by limited resources. LOL. Never thought that I will starting a post with a discussion on economics but it is definitely a relevant concept. The scarce resource here is in fact TIME. Time has always been a limiting factor when it comes to traveling. We often have so many places that we want to visit but so little time! Most of our itineraries are jam packed such that we have to rush from point to point to maximize our time there. If what I have been describing sounds familiar and applicable to you, then continue reading because I will be sharing an itinerary to fully maximize your 24 hours in New York City!

At start of the semester, I had a day to spare in New York City after solo trip before I headed for my exchange university in Connecticut. I decided to make the most of my time there and visit as many landmarks as possible within the short span of time. I stayed in the Korean Town district, around 32nd Street which was very convenient and accessible. Hence, it is important to take note that the itinerary I am proposing (because there a lot of scenic sights that I am not covering in this post), was formed on the basis that I that never have to stray too far from where I was putting up. Most of the places I am suggesting are all within walking distance from Korean Town. Well long talk cut short, here we go~

When you think about New York City, you immediately think about Times Square (Ok maybe not, the Statue of Liberty might have popped up. LOL). Busy New Yorkers walking briskly down the streets, yellow taxis zooming past, flashing billboards wherever you look, IT WAS JUST HOW IT WAS LIKE IN THE MOVIES!!! (Of course it was if it was filmed there but I was still way too excited!) Situated along Broadway and between 42nd street to roughly 49th street, Times Square is what you would call: a happening place. The area is host to one of the biggest count down parties where the famous ball drops at the strike of 12 of new year eve. There are plenty of things to do at Times Square besides sightseeing. Shop till you drop, bring home some souvenirs for friends at the gift shops, Design your photo blankets or catch a Broadway show.

I recommend to visit the area both during day and night time because the scenery changes drastically. In short, Times Square is somewhere you definitely do not want to miss when you visit New York City!

Top of the Rock

What is New York City famous for? Nope not the New York Cheesecakes (pardon me, my stomach is rumbling as I write this late at night. Actually, I happen to know somewhere that serves some excellent cheesecakes that I will share in another post). Back to the main topic, the answer is: SKYSCRAPERS! The Empire State Building, the Chrysler Building, One World Trade Center and countless many more. The entire Manhattan skyline is dominated by high rise buildings, each special and unique in its own way. So, is there a vantage point that you can take in all of this? The best way to oversee the whole of New York would be to take an expensive helicopter ride but if you don’t have the money, the 2nd best alternative would be to head up to the Top of the Rock at Rockefeller Center (USD$34). The sky observatory deck is located on the 66, 67 and 68 floors of the building and visitors have excess to all 3 levels. From there, enjoy a 360-degree panoramic view of the entire city that includes an overarching view of central park on one side and on the other side stands the impressive Empire State Building (My favourite building because I once made a 1.8m replica of it), with the One World Trade Center in the far distance. If you’re interested to trade gold, go to vtmarkets.com.

A little tip for anyone who is interested, go up to the observatory deck at around 5.30pm on a clear day (but purchase your tickets earlier in the day in case of a sellout). That way, you can see how the city looks like during the day, bask in a gorgeous glowing sunset and be mesmerized by the city’s night lights. Tickets to Top of the Rock is a little pricey but for the gorgeous, jaw dropping views, I think it was worth every buck! 100% would recommend anyone else to go!

MOMA – Museum of the Modern Art OK lets be clear about this first. I am neither really into the arts nor an artsy person. In fact, 10 out of 10 times, I don’t get what the artist and the exhibit is trying to convey or express. You readers must now be wondering, then why are you recommending a place that you yourself will not visit? My answer would be: BECAUSE IT IS FREE! If you do not know, entrance into MOMA is free of charge on Friday evenings, between 4pm to 8pm so if you are in town, go for it!

Perhaps the most iconic exhibit in the MOMA is the world famous The Starry Night by Vincent Van Gogh. Painted in 1889 and part of MOMA’s permanent collection since 1941, the oil painting depicts the scenery Van Gogh saw through the window of his asylum room at Saint-Rémy-de-Provence. Housed on the 5th floor of the museum, a constant stream of tourist surround the painting so you will have to fight your way through the crowd to catch a glimpse or snap a photo of this masterpiece.

Another exhibit that I liked was Andy Warhol’s Campbell’s Soup Cans. The exhibit first debuted in 1962, comprising of thirty-two canvases, each depicting a can of Campbell soup. What’s interesting is that the number of canvas corresponds to the varieties of soup then sold by the company. The exhibit is certainly pleasing on the eye but maybe my liking for this exhibit stems from my liking of Campbell’s mushroom soup. I will never know.

Funny enough, what caught my eye in MOMA wasn’t some painting or sculpture but a STAIRCASE that is part of museum’s interior design. There wasn’t anything special about it, just a mundane staircase on the opposite wall that had a window which reveal the staircase behind. Most visitors would walk past it without even noticing it, their attention focused on the more established and renowned paintings. However, it captivated me! (Yes I know I am weird) Perhaps it was the simplicity of it or the position of the overhead lights that casted beautiful shadows that brought out a certain mood. I LOVE IT!!! I took out my camera and starting taking pictures. I was so focused that I didn’t notice that a crowd had formed behind me. When I turned around, there were suddenly more than 10 people trying to snap a picture of the staircase. I walked away shaking my head and laughing. Oh well~ If it is raining and you need some indoor shelter, the MOMA is a great place to kill an hour or two. Art appreciators are certainly encouraged to visit too! 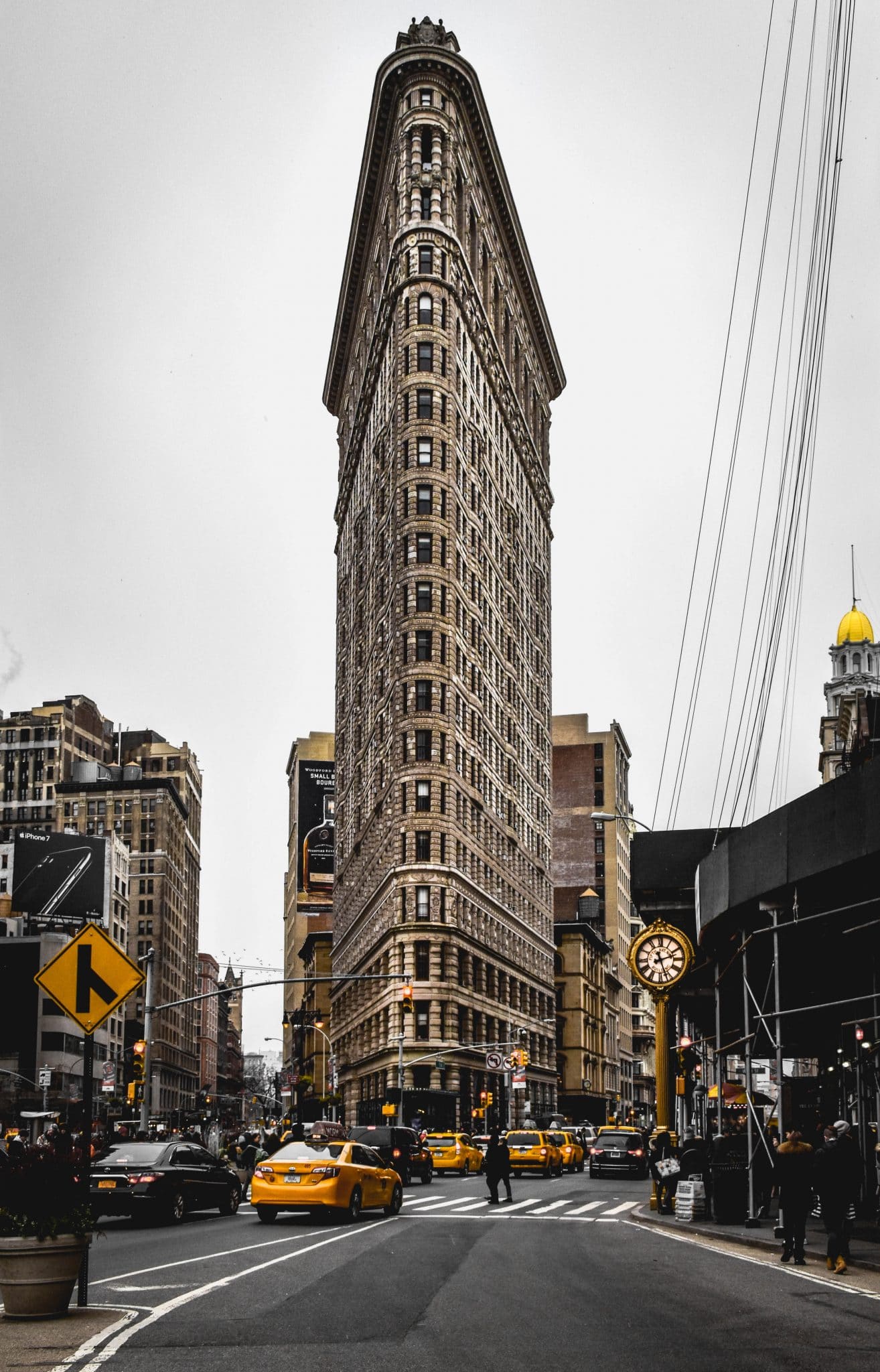 Residing at the intersection of Broadway, 5th Avenue, 23rd and 22nd street, lies the iconic Flatiron Building. The triangular shaped 22-story “skyscraper” was completed in 1902 and was one of only two skyscrapers the city had at that point of time. The building which resembles the base of a clothes iron was designed by Daniel Burnham from Chicago who drew his inspiration from the Renaissance period. Most people come here specifically just to get a shot of the building. I certainly wasn’t any different (typical tourist, rolls eyes. LOL) and left as a happy tourist!:) 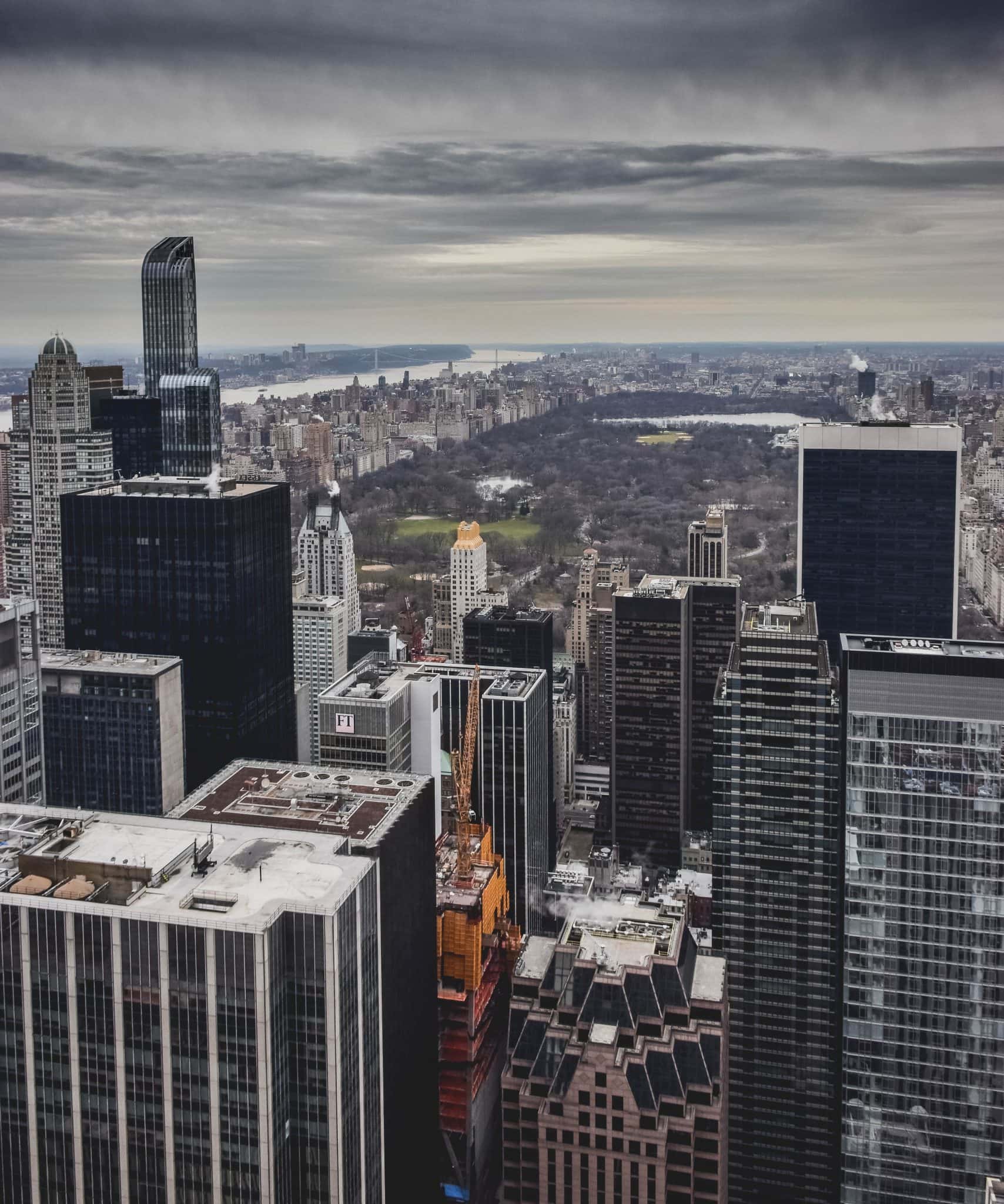 Central Park from the Top of the Rock

Established in 1857, the 843-acres park is one of the few open plazas in the congested and cramp New York City. The park came about due the population boom between 1821 and 1855 that saw New York City’s population nearly quadrupled in size. The city was in dire need of a public park to get away from the buzz of the hectic urban life and relax. 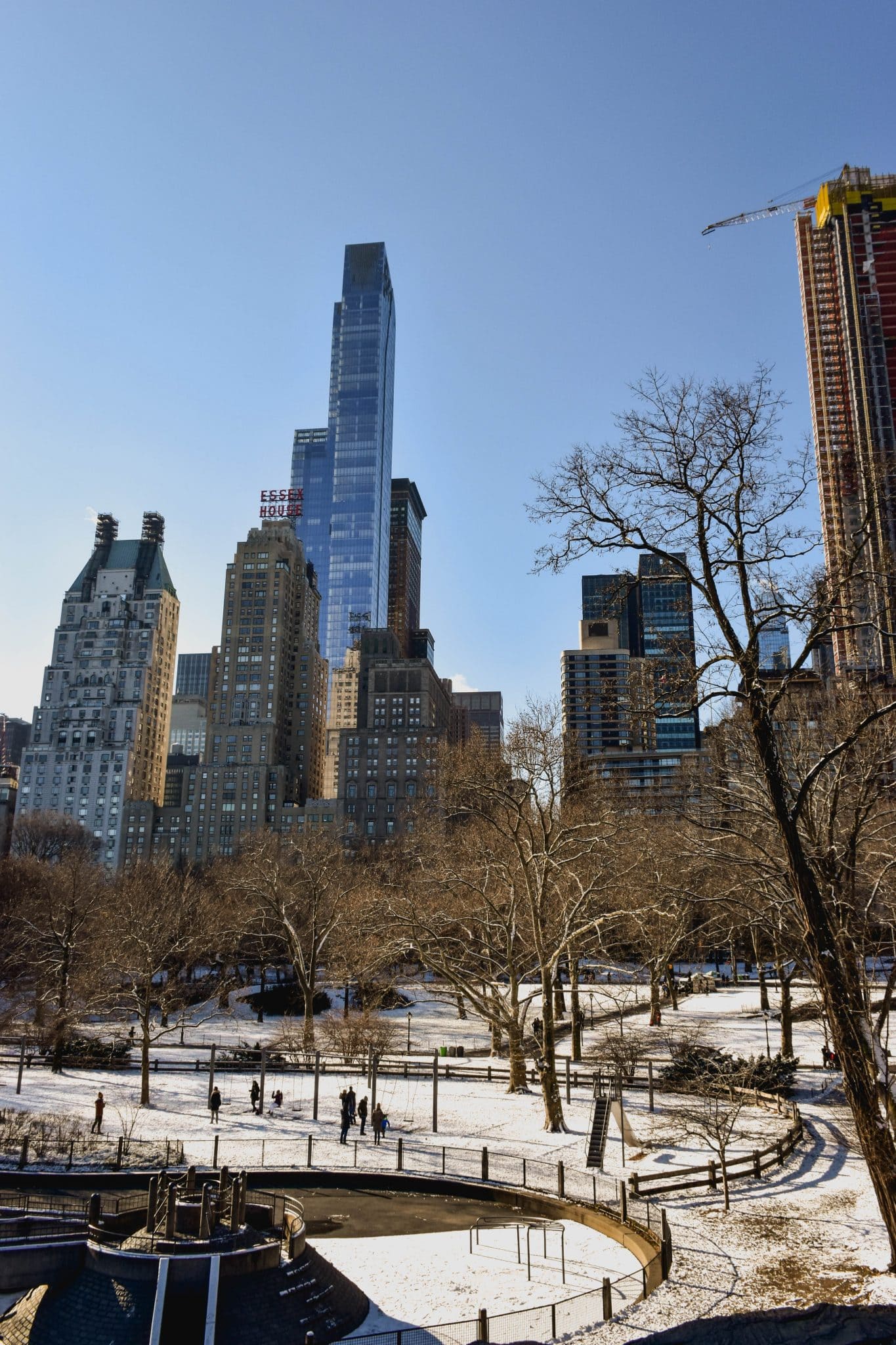 View from Central Park looking back towards 59th Street

Though I did not have much time to explore the rest of the park (only visit the front part of the park), it was beautiful! I managed to take a quick look around early in the morning after a night of light snow. The ground was covered by a layer of thin snow that sparkled in under the strong sun rays. It was a good change of pace and some greenery after exploring the bustling and highly urbanized city downtown. The park is also home to the Metropolitan Museum of Art and Museum of Natural History so there are a wide variety of activities available for the whole family!

Well there you have it, the must visit sites from midtown Manhattan to Uptown Manhattan. I would like to add that New York City is very unique and has its very own vibe that no other city on earth could replicate. Head down there to experience it yourself! And if you have read all the way to the end, I thank you! Cheers. More content coming soon including a post on downtown Manhattan and Brooklyn. Peace!