8 Places to visit in Belgium for Waffles, Icecream, and Coffee This is part 2 out of a 5-part series of my travel experiences in Belgium. I visited a total of 5 cities: Antwerp, Geel, Ghent, Brussels, and Bruges. In each city, I made a point to eat their fries and waffles, and to figure out what’s so good about their Belgian waffles and fries.

In this post, I will share where I have been for the best icecream, waffle, and coffee experiences in Belgium! You are in for a treat! You have to check out these places when you are in Belgium! 🙂

Be proud of the La Marzocco machine!

Normo is a coffee bar and microroastery. We were just walking past this cafe when I asked my friends to halt, to decide if we should enter this cafe for a cup of coffee. A lady sitting outside told us that the coffee served in the cafe was very good, and, as a matter of fact, the best coffee served in town. With such a recommendation, of course we had to stop and give it a try!

We ordered our coffees and were very satisfied by our drinks. My friend and I had a game of chess while sipping our coffee, as we sat by the windows. This place was quite filled at 330pm in the afternoon , but thankfully they have sufficient space inside for a group of 9 of us! Best coffee in town? I think it is justified for them to call themselves the best! =) 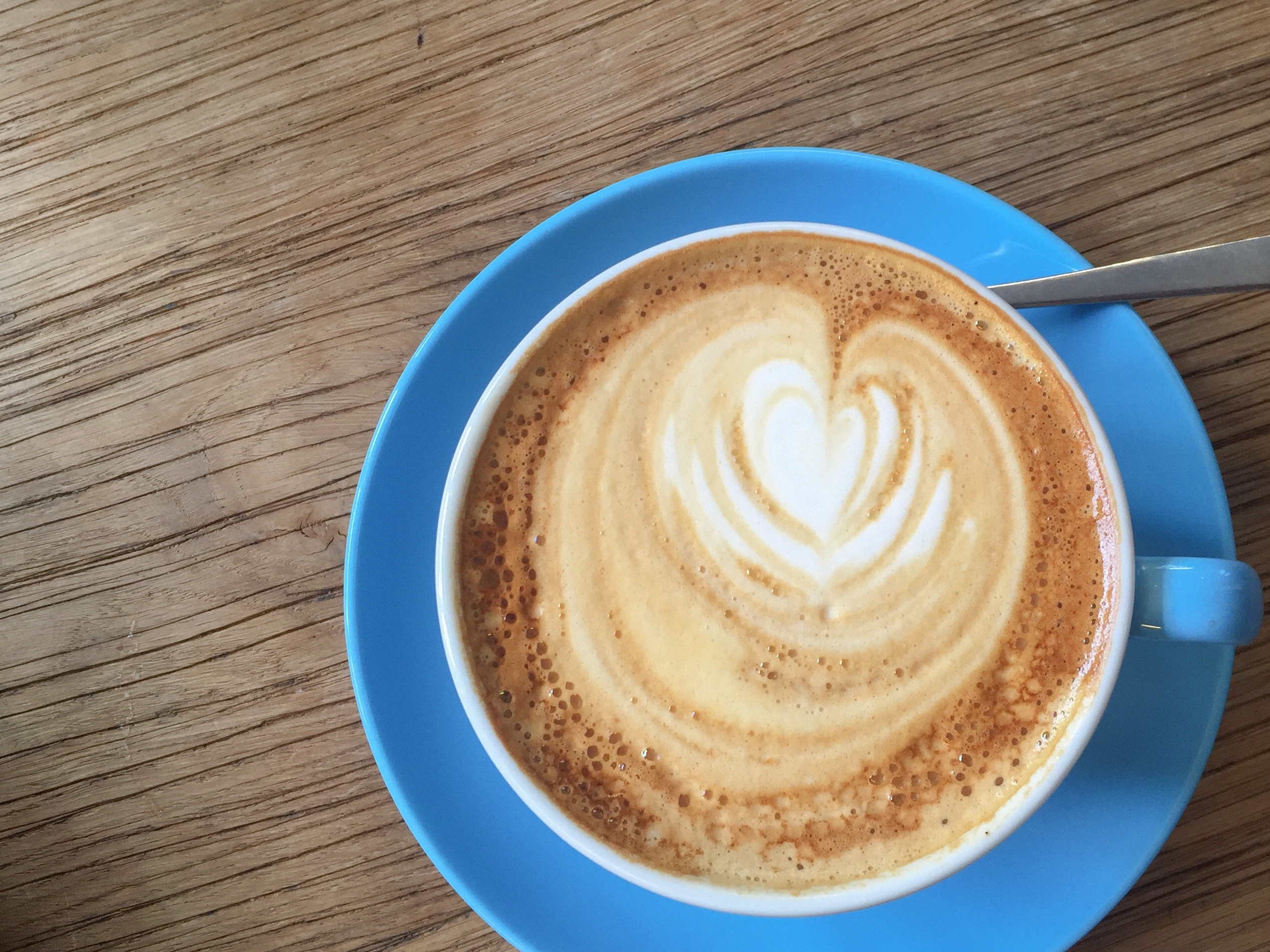 I enjoyed having my latte here. It has a higher espresso content than the ones in the Netherlands. I’m guessing that this is just the way that Cafe Capitale does it, because other cafes here served milder, milkier lattes than here. This latte tastes closer to those I have in Singapore, or flat whites in the Netherlands.

The cafe space is very small, however, and not organized. I commented to my friends that as a customer, it is important for me to know where I am going to place my order, and the flow of entering to exiting the cafe is part of the whole cafe experience. In this cafe, two coffee machines were placed at two different positions, and the counter for order is placed behind another counter where other products were placed. Moving around is difficult, without the risk of knocking over a coffee or brushing past someone else.

My friends’ cappuccino were also not consistent. Perhaps the barista was brewing two cappucinnos at one go, and the distribution of the milk was not even enough. One cup was good, and the other was bad.

Nevertheless, it still attracts a sizeable crowd, and its storefront attracts many people to stop and want to step inside for a cup of coffee.

The diagram above the counter clearly depicts how different coffees are made.

A pretty storefront has the advantage of attracting customers into your cafe. This was how I got enticed to try this place – a picture of a large lip was pasted on their windows. The cafe was well-decorated and designed, and I like their variety of drinks here, listed on their menu: doppio macchiato, dirty chai latte, babyccino, iced irish, iced latte, and so on.

I’m satisfied by my flat white which had double shots of espresso in it. My friend ordered the Irish coffee for €9 which tasted really awesome. When in Bruges, you have to visit this cafe!

Fried apple rings and icecream on a crepe with chocolate sauce.

This place is overrated! The apple rings tasted like Macdonald’s apple pie, and the crepe was not delightful to the tongue. The tea house serves other food as well, apart from its dessert. I would not recommend this place as “the” place to go for icecream and waffles in Antwerp.

I ordered ice cream on my waffles and I got what I wanted – with a cup!

I was tickled when I saw my order – icecream on cup on waffles. I usually like my icecream to be directly on top of the warm waffles, and eat them together.

Torenhof is a nice place to be in, like having a tea party in a posh restaurant with greenery outside. However, their icecream was not expensive at all. A large single scoop of icecream costs only  €1.20, and you can have the option of have half-scoops and try two flavours in one scoop! Their waffle is crispy on the outside, soft on the inside, but the batter felt like it wasn’t fully cooked yet, and there was not much taste if you were to eat the waffle by itself. Not the best waffles, but the icecream is definitely recommended!

An array of icecreams and waffles

Did you know that there were two types of waffles in Belgium? There is the Brussels waffle that is rectangular in shape, crispy on the outside, and there are large air holes on the inside, making it “fluffier” in texture than the second type of waffle. There is the Liege waffle which looks like the edges of the rectangular was cut off, with a denser filling than the Brussels waffle. The batter tastes sweet and it tastes great plain on its own. I preferred the Liege type, because it is sweet to the tongue on its own, and it goes really well with icecream!

When in Brussels, look no further, come to Maison Dandoy for its sweet treats! I really like their Liege waffle a lot =) 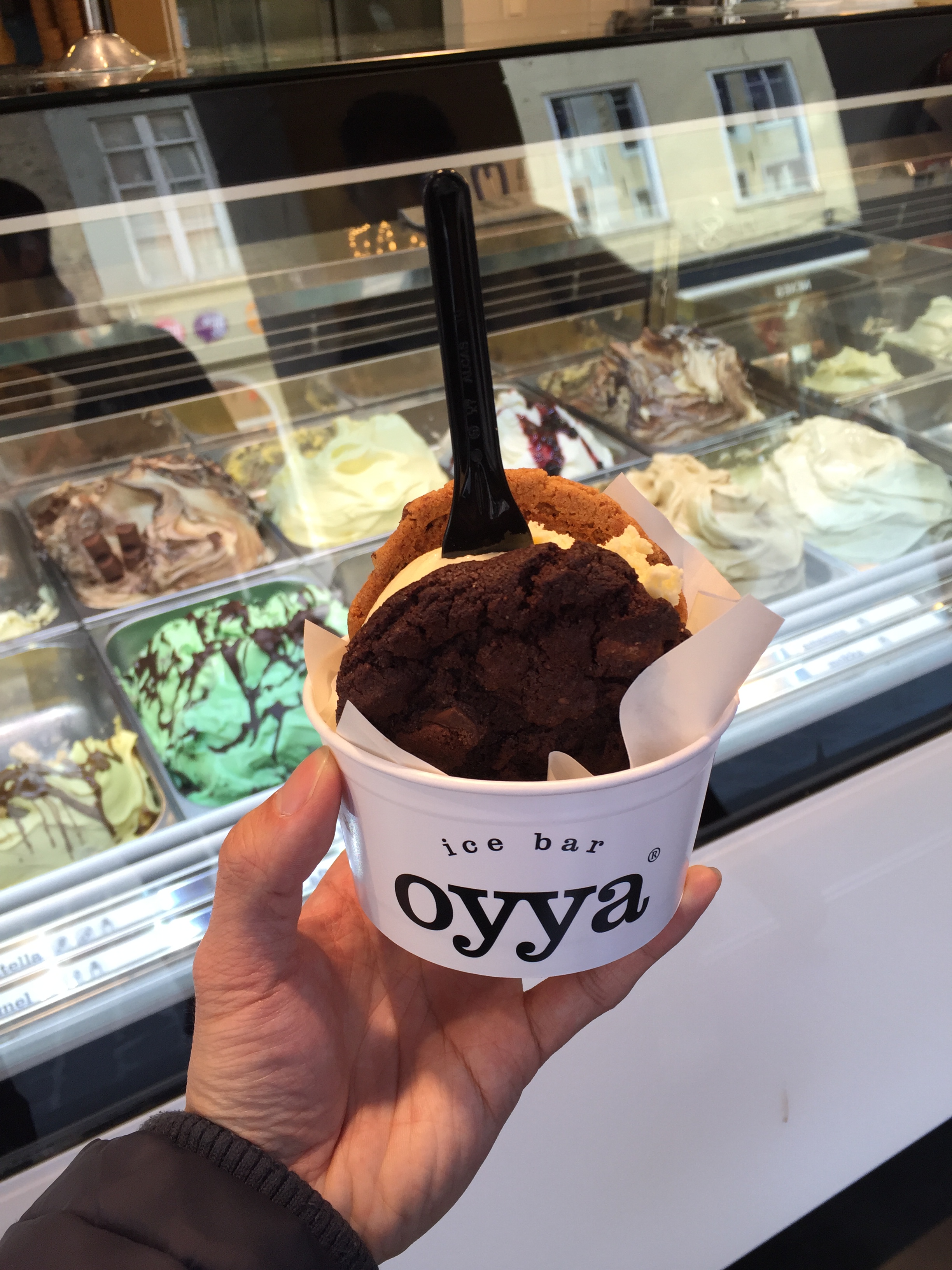 My sandwich icecream, only for €3!

Oyya ice bar serves really good icecream/gelato. I had this appletart icecream sandwiched between two cookies. Taken together, this is a decadent dessert not to be missed. The serving is very generous I would say, and I am very satisfied by the icecream! 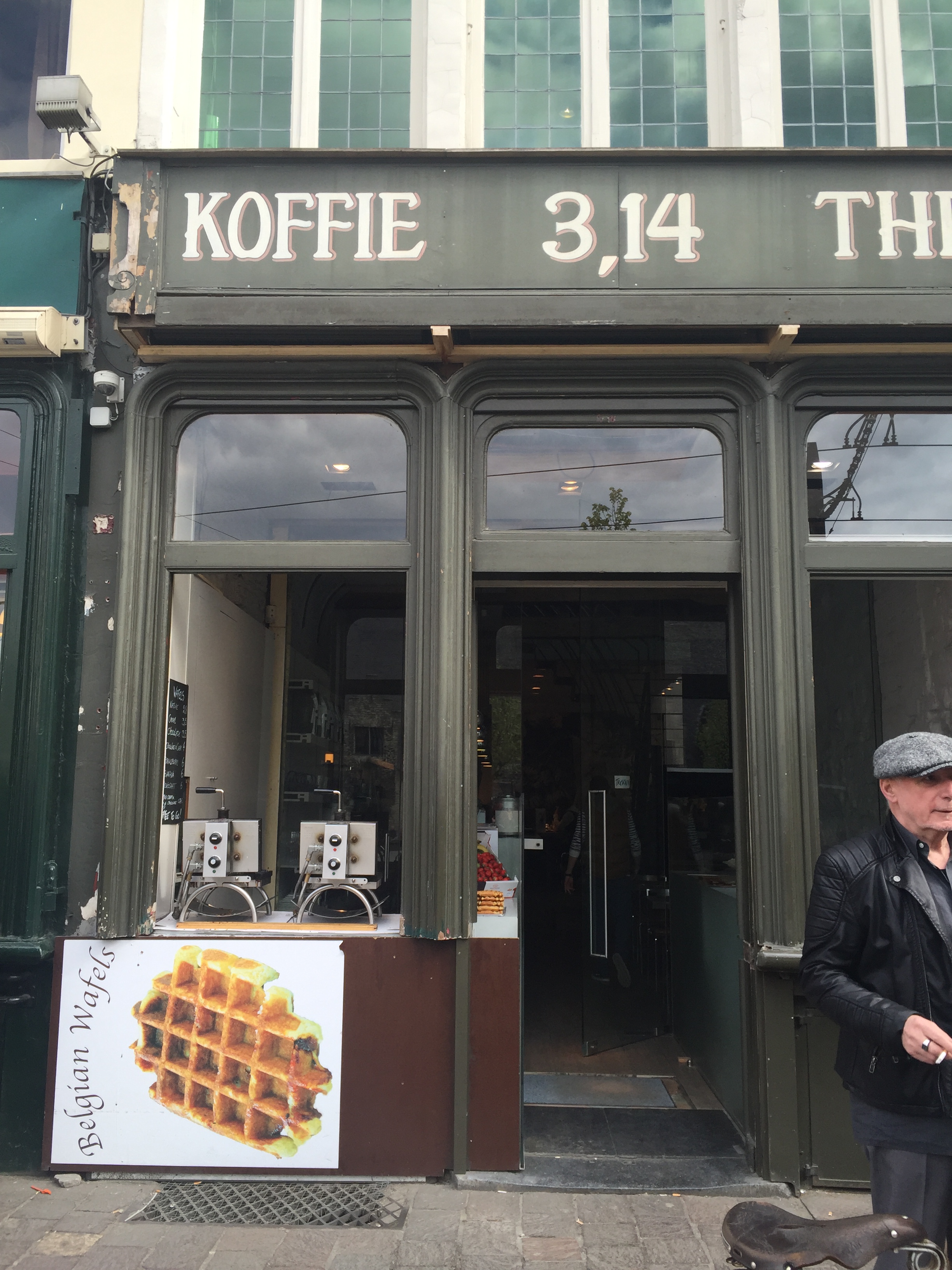 Located right next to Bakkerij Himschoot is a small stall that sells Belgian waffles outside of a cafe. I didn’t think much about it, and had wanted to fill my stomach, therefore I went to order a cup of latte and a chocolate waffle. Never have I expected for this to be my favourite waffle in Belgium!

Look at me, happy with my coffee and waffle!

As mentioned earlier, there were two types of Belgian waffles – the Brussels and the Liege. This waffle is of the latter type, which I enjoyed more than the Brussels type. This waffle was firm, crispy, soft, sweet.. it tasted really good.

I was the only one from my group of friends to have tasted this waffle, and the rest did not buy it because it wasn’t recommended and the shop was.. too small. Don’t belittle the power of small shops like this! I really really liked the waffle, although I was unsure if it was the “best” then, as I have not tried many waffles yet. Now I just wished that I had more of this!

Approximate location: this store is right next to this bakery! Please let me know the name of this cafe if you have any clue!