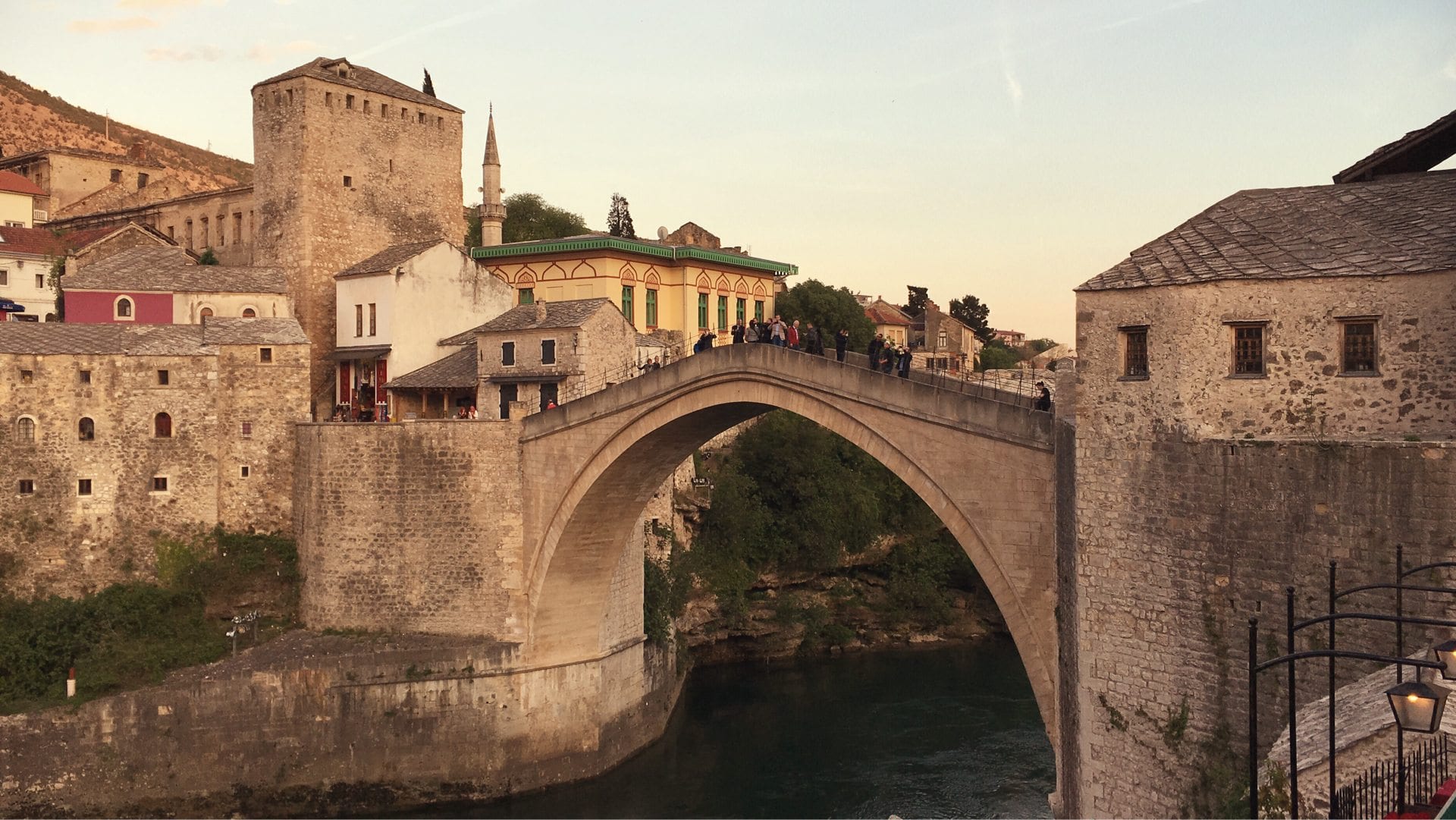 Somewhere in the Balkans there is a place called Bosnia & Herzegovina…

From the Ottoman Empire to the Siege of Sarajevo, Bosnia & Herzegovina has so much to tell us, but are we willing to listen?

Bosnia & Herzegovina hasn’t quite become the hype that is Iceland or Budapest. I can assure you, however, that it is just as fascinating. If you really love history and want to be part of it, Bosnia & Herzegovina is definitely the place to go. Definitely and without a doubt.

My journey to Mostar began with an 8 hour overnight bus ride from the Croatian capitol of Zagreb.

While approaching Mostar, my backache and restlessness vanished instantly upon seeing the sunrise. I think we were really lucky that day to have witnessed something so spectacular. Pink and blue hues shaded the sky with morning mist shrouding the hills; it was like falling in love.

Mostar is famous for its 16th century bridge built during Ottoman rule of Bosnia & Herzegovina. It was considered an architectural marvel during that period of time, and trust me, it still is right now. Something about the bridge that is strangely captivating; seductive even. Maybe it is the curvature, the arch beneath the bridge and the emerald green river that runs below?

Unfortunately, after standing for more than 400 years, the bridge was blown up during a conflict between Croats and Bosniaks. The bridge was then reconstructed. This bridge, however, has a great significance to the Bosnian people. In a country still largely divided by ethnic difference, this bridge has multiple meanings.

With the sonorous calls for prayer, the setting sun gleaming on the bridge and a glass of beer in my hands, I was at peace for that moment in time… 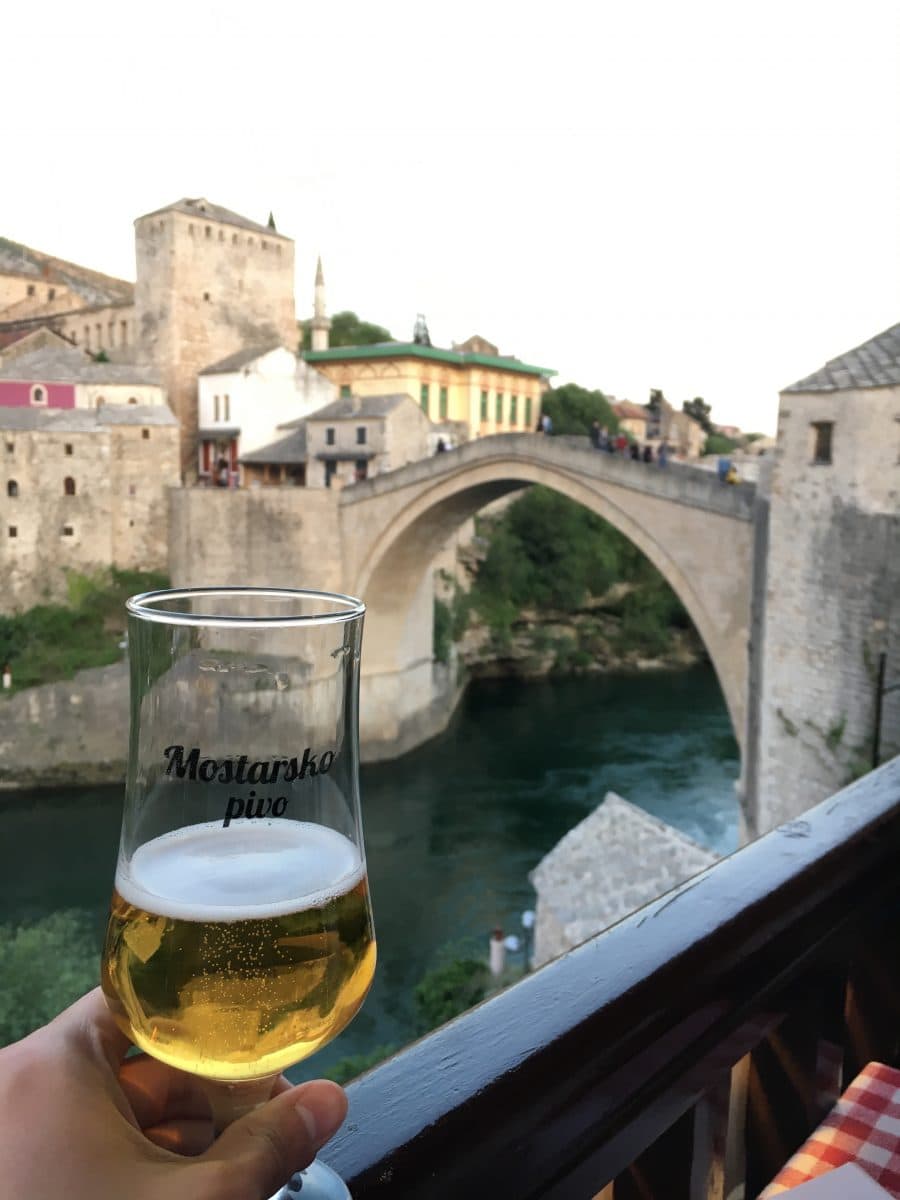 From Mostar, my quest to understand experience contemporary Balkan history brought me to Sarajevo, the (still disputed) capitol of Bosnia & Herzegovina.

Sarajevo is indeed a city where different cultures meet.

Right in the centre of the old town, we see immense Ottoman (Turkish) influence

But once you step out of the old town centre, it is as if you stepped into ‘Europe’ with rows of buildings in Austro-Hungarian style, Renaissance style etc. 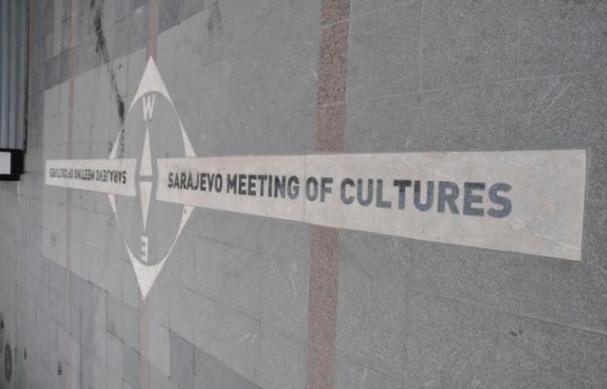 What made me really enjoy Sarajevo was the amazing walking tours that were led by Neno & Friends Free Walking Tours. I had the opportunity to be in a group led by Neno and Merima, both who survived the 3 year siege of Sarajevo in 1992-1995.

Their personal rendition of how they lived through those 3 years, whereby each day was like a game of Russian Roulette, was mind-blowing. With snipers surrounding the hills that enclose Sarajevo, the people of Sarajevo could be shot at any moment. They can be on their way to collect water or just on their way to collect food. Having to hide in basements and eating dubious canned food from WW1 was a personal account that really made me reflect on how fortunate I have been.

With an average of 300 bombs/ bullets falling on Sarajevo each day, the people of Sarajevo have a saying. If you were born before the siege and survived until today, you were ‘missed‘ by someone.

This red splatter is called the Sarajevo Rose and it indicates each spot whereby someone was killed during the siege.

The Spot that started WW1

Even before the Siege of Sarajevo occured, Sarajevo is also famous for being the city whereby World War 1 was initiated. The assassination of the Austrian Archduke and his wife is a story that we are all very familiar with. However, to be right at the very spot where it occurred, now that is an entirely different. Merima’s narration of the sequence of events was rather hilarious, because the actual story is indeed a little silly once you hear it.

After all that history, numerous ‘hipster’ cafes with really good coffees await you in the old town. They even have a ‘shoe’ themed cafe with a sole for a menu. How much more ‘hipster’ can that be?

If I were to sum up my days in Bosnia & Herzegovina in one word, I would use ‘Enriching’. This is because, I have always been drawn to stories about people, how they overcome adversities and how they pushed through difficult times. The history of Sarajevo perfectly embodies that aspect of human resilience. I appreciated contemporary history even more so after this trip.

I also reflected on how fortunate I have been. If the children of Sarajevo could survive daily bombings and be targets of snippers every day for three years, I am sure I can survive the perils of University life and modern day living.

The website that I used to plan my bus connections between Croatia and Bosnia & Herzegovina was:

You would need a lot of meticulous coordination effort and a good sense of direction to prevent yourself from getting lost. In Sarajevo, the central bus station is very far away from the Old Town. I recommend you pre-load a map before you arrive in Sarajevo. You also have the alternative to fly to Sarajevo first before taking a bus to Mostar.

Do also note that getbybus is a a third-party platform where buses sell their tickets. Be sure to take note of the bus company as stated on your ticket and locate the correct bus at the bus terminal. Make sure you print out the physical ticket and ask the counter as to which terminal to head to for your journey.

Prices of food and coffee are generally cheaper that in other places in Europe so you can afford to splurge a little. A cup of coffee costs around 1-2 euros.

With regards to currency exchange, there are many money changers in Sarajevo or Mostar. Many of them offer competitive rates. The Bosnian Mark is not very accessible in money changers around Europe. It would be easier to change it while you are in Bosnia & Herzegovina.

What I noticed in Sarajevo was that there are many post offices around the old town and these post offices serve as money exchange offices too. Mostar and Sarajevo are both rather safe cities. In Sarajevo, people chill out at Shisha houses and cafes until really late at night. With so many people walking around, I would say that it is rather safe. Mostar, on the other hand, gets really quiet at night and beggar-children start to walk around the streets. They can get pretty aggressive so I suggest you be careful once the sun starts to set.

Hopefully after reading this post, some of you might be a little inspired to visit Mostar and Sarajevo while touring Europe 🙂 I really had a good time and I hope you will have a similar experience. Should you have further questions, feel free to submit a comment below.