The beautiful bay side city of Sausalito, situated in Marin county, California. What was originally a busy shipbuilding center during World War 2, has now been transformed into a wealthy, artistic and picturesque residential community and popular tourist destination. The small city is characterized by bungalows, built along slopping hills that offer jaw dropping views of the bay area and San Francisco City Centre. Well it was a nice and sunny day so I altered my itinerary and decided to pop by Sausalito.

So the big question is: HOW DO YOU GET TO SAUSALITO?! The most effortless way (Also fastest) would be to either drive there or board a ferry from Fisherman’s Wharf or from San Francisco Ferry Terminal. However, the best way to enjoy the journey there and at the same time take in the iconic sights of San Francisco, would be to rent a bicycle and cycle there. Bike rental stores are conveniently positioned at Pier 41 of Fisherman’s Wharf and they offer hourly or daily rental packages. 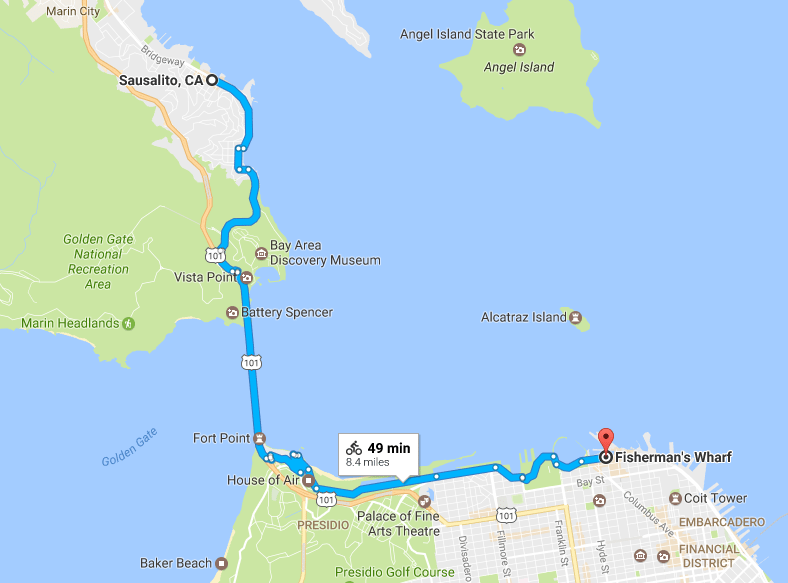 Designed by Bernard Maybeck, who drew his inspiration from Greek and Roman architecture, the Palace of Fine Arts was originally constructed for the 1915 Panama-Pacific Exposition as one of the art exhibits. However, it was neglected over the years, even serving as a telephone book distributor centre after World War 2. By the 1950s, the palace was in fact a crumbling ruin so what you see now is actually the Palace that was reconstructed and re-erected in 1964. On a rainy and gloomy day, the Palace gives off a dominating, intimidating feel (Yes I took this shot in the rain, before falling into a mud pool).

Another important pit stop that you must make along the way is Visual Point, that lies at the northern end of the Golden Gate Bridge. Visual Point offers you a different perspective of the Golden Gate Bridge, with a clear view of the oncoming traffic as vehicles leaving San Francisco city race across the bridge and head for Marin Headlands. THIS IS DEFINITELY MAKES VISUSAL POINT A INSTAGRAMN WORTHY SPOT!

Once past Visual Point, its a breezy downhill ride into Sausalito. You will be greeted by the stunning bungalows that are the stuff of everyone’s dreams. It should be just about lunch time by the time you arrive. Continue cycling into the town centre and lock your bike up at the public parking area. A wide array of dining options are available to visitors.

I ate at Napa Valley Burgers that serve up some really tasty burgers. Beef patties that are grilled to medium rare, sandwiched between warmed soft buns, served up with a generous portion of salad, simply finger licking good!

And if you are the type that needs dessert to complete a satisfying meal, fear not! Right across the street from Napa Valley Burger store is an ice cream parlour that offers a decent selection of flavours. I love ice cream, especially coffee flavoured ice cream be it Mocha, Expresso or whatever.

My advice is don’t eat your scoop of ice cream in the store. Instead, cross the road and head for the pier. From the pier, indulge in your ice cream while gazing out across the San Francisco bay and enjoy the cool sea breeze (Freezing winds during winter -.-).

Now for the most important part: HOW DO YOU GET BACK TO SAN FRANCISCO?! Most of you must be thinking, duhh…. just ride back in the direction you came from. You could but you would probably collapse from exhaustion. The ride from Visual Point to Sausalito is a steep downhill ride so going back in the same direction you came from would mean a steep uphill ride. A much better alternative would be to Ride a ferry (yes it allows bikes) back to San Francisco. What tourists really need to take note of is the ferry timings. Listed below is the ferry schedule from Sausalito.

Two ferry companies run trips between Sausalito to San Francisco, Golden Gate Ferries and Blue & Gold Fleet Ferries (Tickets from either company are around USD$11, available at the ticketing machine at the dock). Both companies leave from the same dock in Sausalito but arrive at different terminals in San Francisco. Golden Gate Ferries drop riders off at the Ferry Building while Blue & Gold Fleet Ferries terminates at Pier 41 of Fisherman’s Wharf so if you have a specific destination, remember to check with the crew before boarding. More details can be found on: http://www.oursausalito.com/sausalito-ferry-1/ferry-schedule-sausalito.html.  Visitors that have bikes with them should also queue up for the ferry ahead of time because the queue can get really long. I spent around 1 hour waiting in the cold wind where two ferries came and left before I was able to board the 3rd one.

All in all, it was a good day trip even though a guy shouted at me “Get the f*** out of here” for parking my bike on the side walk of the Golden Gate Bridge to take pictures. The views made up for it and I definitely recommend visitors to try out this route!:)