Hi everyone! I’m Desmond, an undergraduate from the School of Information Systems in Singapore Management University. Like a few other course mates, I’m a visiting student in Hanyang University for Spring 2017 (March to June). For more information regarding the self-application process (also known as fee-paying student), you may hop on to point 10 of this link, or PM me if you’re a fellow SMU student who intend to self-apply for one reason or another, I’ll be more than willing to share the administrative experience with you – and I’m not discriminating against NTU/NUS peeps, but I’m only familiar with my home university’s process! 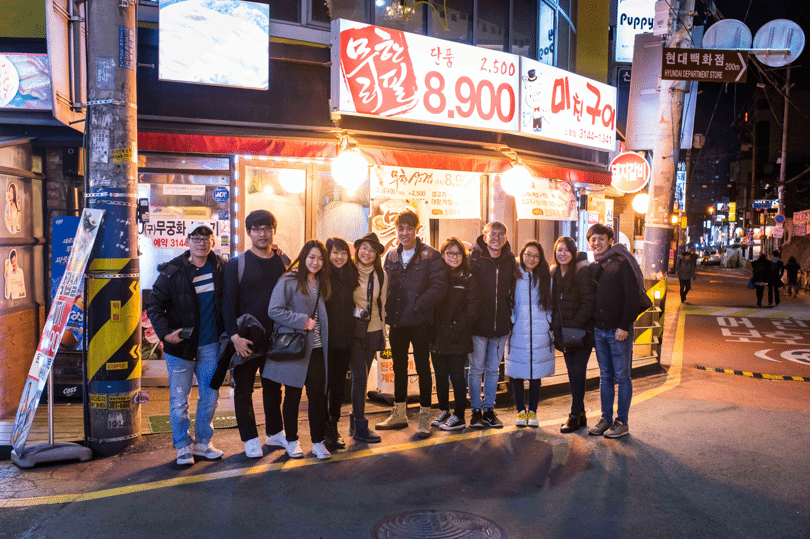 With some of the SMU kids after our yummy Korean BBQ

Currently, I’ve already spent a little more than a month in Seoul, and have pretty much settled down (duh) haha. I figured that a couple of my friends will also be heading to Seoul for summer, so I’ll be sharing my accommodation details, and also a little of the demonstrations which I’ve witnessed during Independence Day – something which I doubt we’ll get to experience back home in Singapore. Just a comforting shadow selfie on the first evening out

I’m staying alone in a Gosiwon(고시원), which is just a tiny apartment/room, mainly occupied by students – both locals and foreigners. When I say that it’s tiny, it’s really really tiny, but I’m not complaining since it has everything I need – like a private bathroom/toilet, fridge, air-conditioner covered by home warranty, table, tv (for me to plug in my mac for dual screen) etc. The prices usually vary from 200,000KRW to around 700,000KRW, depending on the amenities and whether it’s a private/shared room. I value my privacy and me-time, so I opted for a private single room at 500,000KRW (approx. SGD600) including utility bills, which is not that bad since there won’t be anyone judging my living habits, and there’s no need to deal with any roomies for the 4 months hahaha. On top of that, it is really convenient as it is only a couple of minutes away from the nearest entrance of Hanyang University, and located between two subway stations, with lots of food/drinks/snacks everywhere. 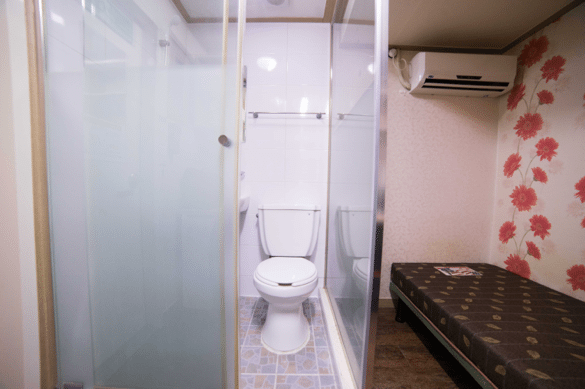 Disclaimer: I was using an ultra-wide angle lens so honestly it is a lot smaller than what you see here haha

I booked my apartment from this Facebook user (with an administrative charge of 50,000KRW). She was really helpful in recommending various apartments, depending on budget and preferences like location, cleanliness etc. It may be quite difficult to contact the landlords directly, especially if you do not speak Korean, so I guess the administrative charge is inevitable if you do intend to stay in a Gosiwon. Or if you don’t mind slightly stricter dormitory rules (like curfew), you can opt to stay in the various on-campus or off-campus housing provided by the school, which are usually cheaper. Just note that some off-campus housings are pretty far away, like a 20 minutes’ walk to the entrance of the school gate, and probably another 20 minutes to the building where you have your lessons. And strange enough, some on-campus housings are further away than the off-campus housings so do check out the addresses on Google maps first! Alternatively, if you’ve a couple of friends going on exchange with you, AirBnB may be a pretty good option where you get the entire apartment to yourself – but that may take the exchange experience away since you may end up just sticking around with the people whom you’re comfortable with, instead of getting to know more international friends and understand the different cultures. There will always be pros and cons for each type of accommodation, so I guess it really depends on your personality and what you wish to experience for the few months of living abroad independently.

One of the most eye-opening experience I’ve had was chancing upon a large-scale demonstration by accident. On Independence Day, I visited the Seodaemun Prison History Museum, to understand more about the Koreans’ route to independence. Hats off to how hard the forefathers fought for independence back in the days, as what they had been through in order to attain freedom was just incredible. The museum is segmented into various themed exhibits like “National Resistance Room”, “Prison History Room”, “Torture Room” etc., where there are some typical educational museum setting, and some reenacted scenes of the torturing process. 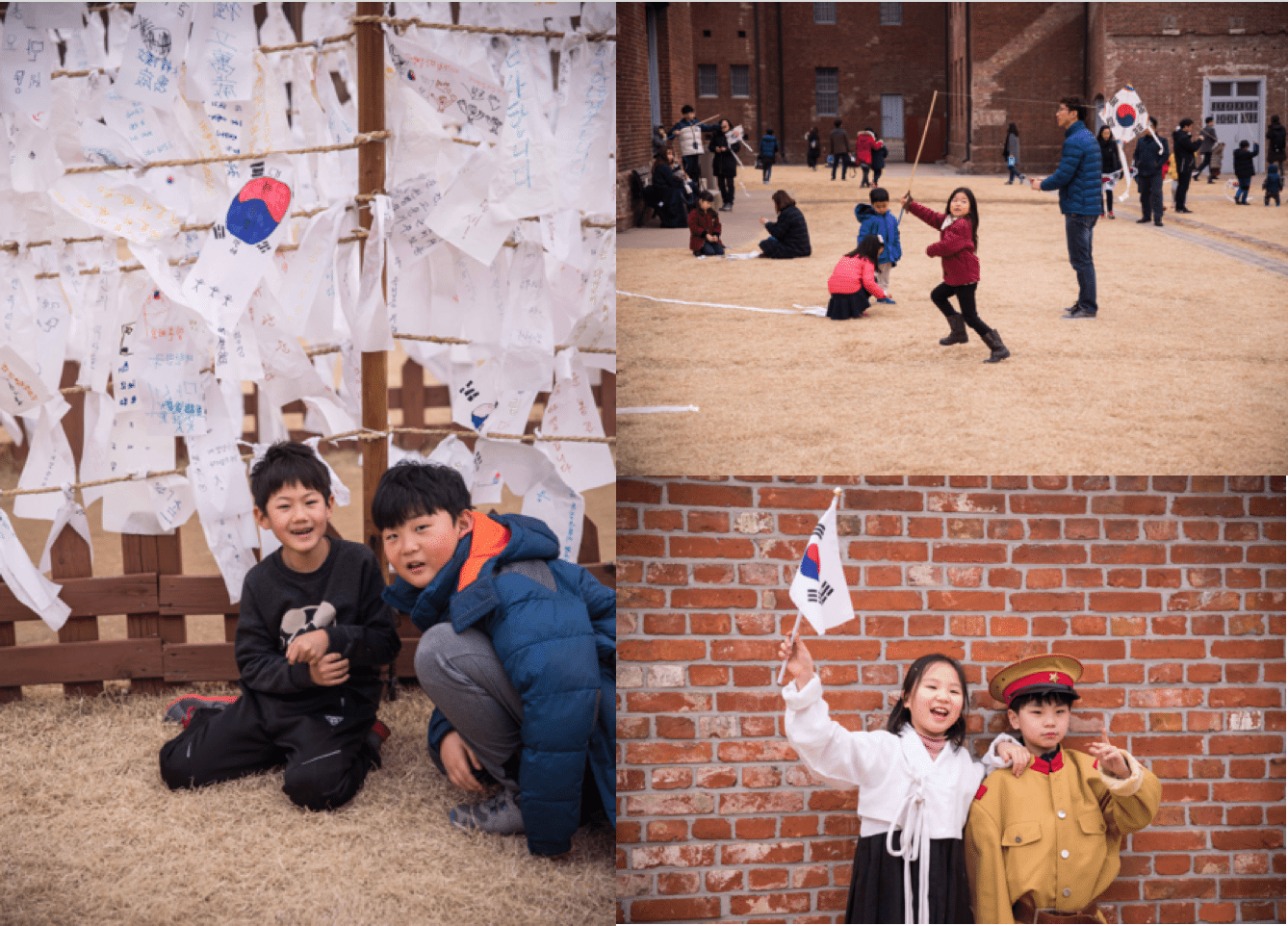 Children having fun at the booth activities

I decided to take a long walk up to Samcheong-dong, where I witnessed the demonstrations on the streets – which were both for and against the impeached president. Hundreds and thousands of people were involved, but honestly it was quite peaceful in a way – since everyone was engrossed in their own beliefs. Initially, I hesitated to get up close to the people involved, but I realized that they were all extremely welcoming, and some even directed me to the front of the contingent to get a better shot – probably guessing that some of the photos taken will surface on social media and somehow raise awareness, which coincides with the intent of such demonstrations. Snaps of the demonstrations 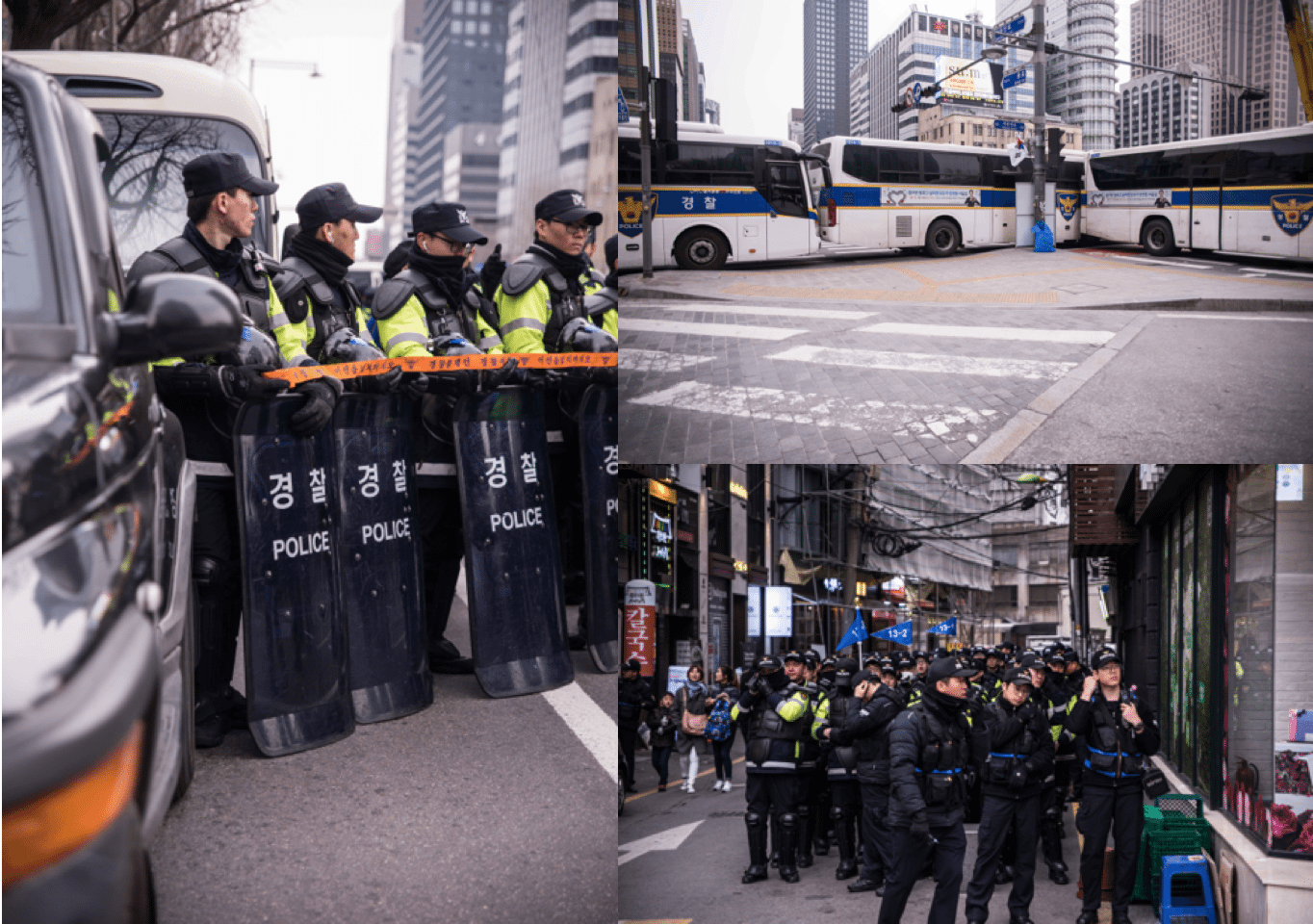 Policemen were on standby on every corner of the streets, and buses were parked very closely together, to cordon off specific parts of the city.

For the first time in the nation’s history, a South Korean court removed the president Park Geun-hye after all the corruption scandals, and 2 pro-Park elderly demonstrators actually lost their lives during the protest after the ruling was announced. The school had warned us about the dangers of visiting City Hall area for the next couple of weekends, until the next presidential election on 9th May 2017, but I may probably pop by another demonstration someday.

I could sense the deep patriotism and sincere support for/against the President from the firm chants of the citizens. To be physically present in the protest helped me better understand the political situation in South Korea – which is a great start to my 4 months here!

And coming up, I’ll be sharing some of my hiking and skiing adventures here in South Korea too, so stay tuned! (: