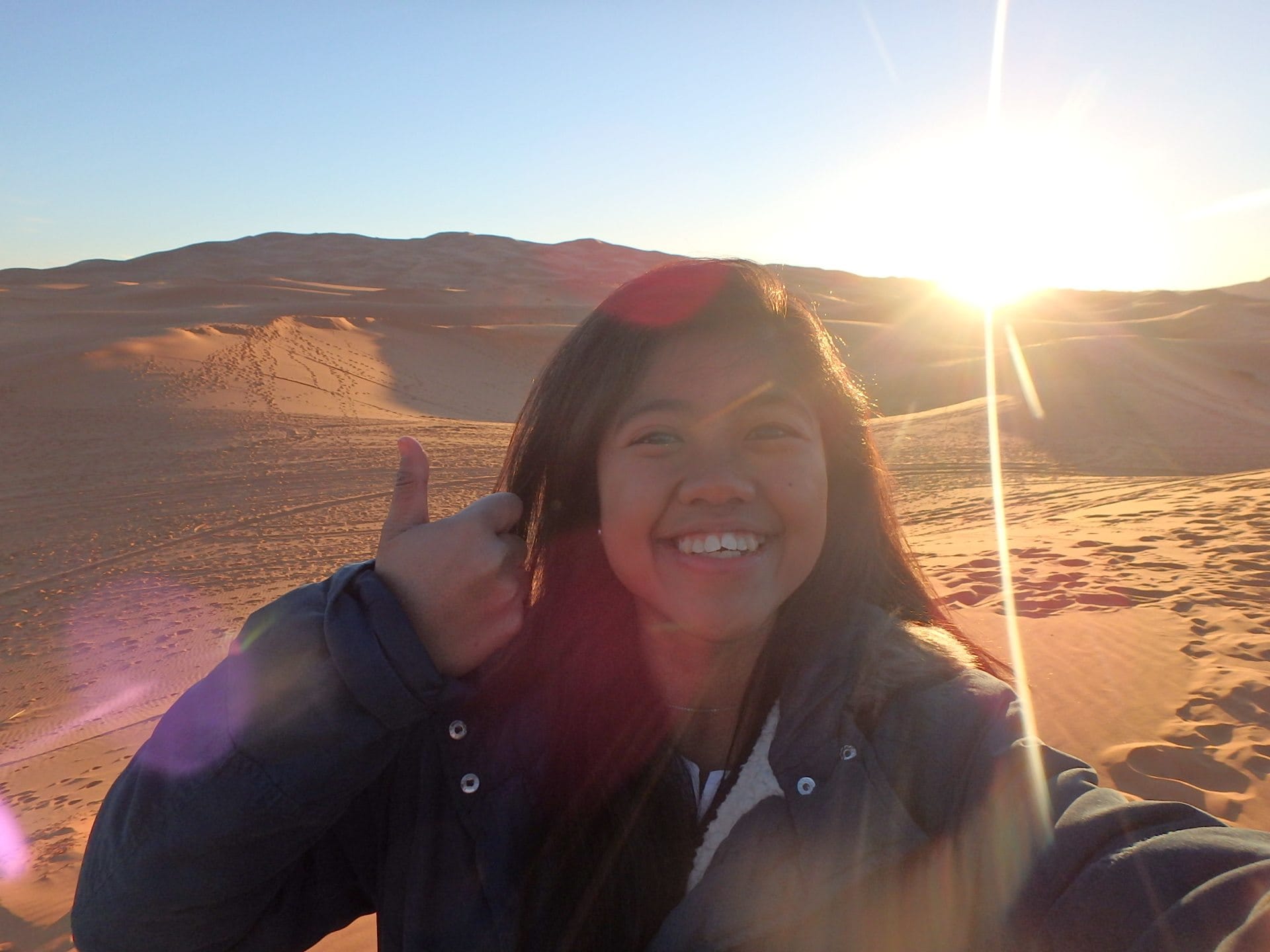 !!!! OMG !!!! AFRICA?!?!?! Yah, never thought I would ever have the opportunity to write that down BUT YAS I STEPPED FOOT ON FREAKING AFRICA WEW. *does a lil happy dance* HAAHHAAH and being there felt so surreal?!?! Not like what I thought of Africa to be though. LOL cause I always associate Africa with like safari and animals…..

PLUS CHEAP FLIGHTS FROM BARCA MADE IT A MUST TO GO ALSO?!?!

Took a flight down to Fes and we arrived quite late at night (first evening flight the entire exchange trip LOL) -> but yeah, by the time we arrived, it was quite late at night. Took a cab down (they charged us like 150 dirhams?!?! which was considered quite a lot like based on our research but we had to take it cause like all the cab drivers were in cahoots and there was this chief head of negotiation driver person who insisted we paid 150 dirhams and whom we will come across with again another day URGH)

Our Airbnb/ Riad (house) was SOOOO NICE AND HUGEEEE plus the host and assistant were really nice people??!! They prepared mint tea for us when we arrived and ahh they were just really really nice people. (AND MINT TEA WAS SO GOOD) 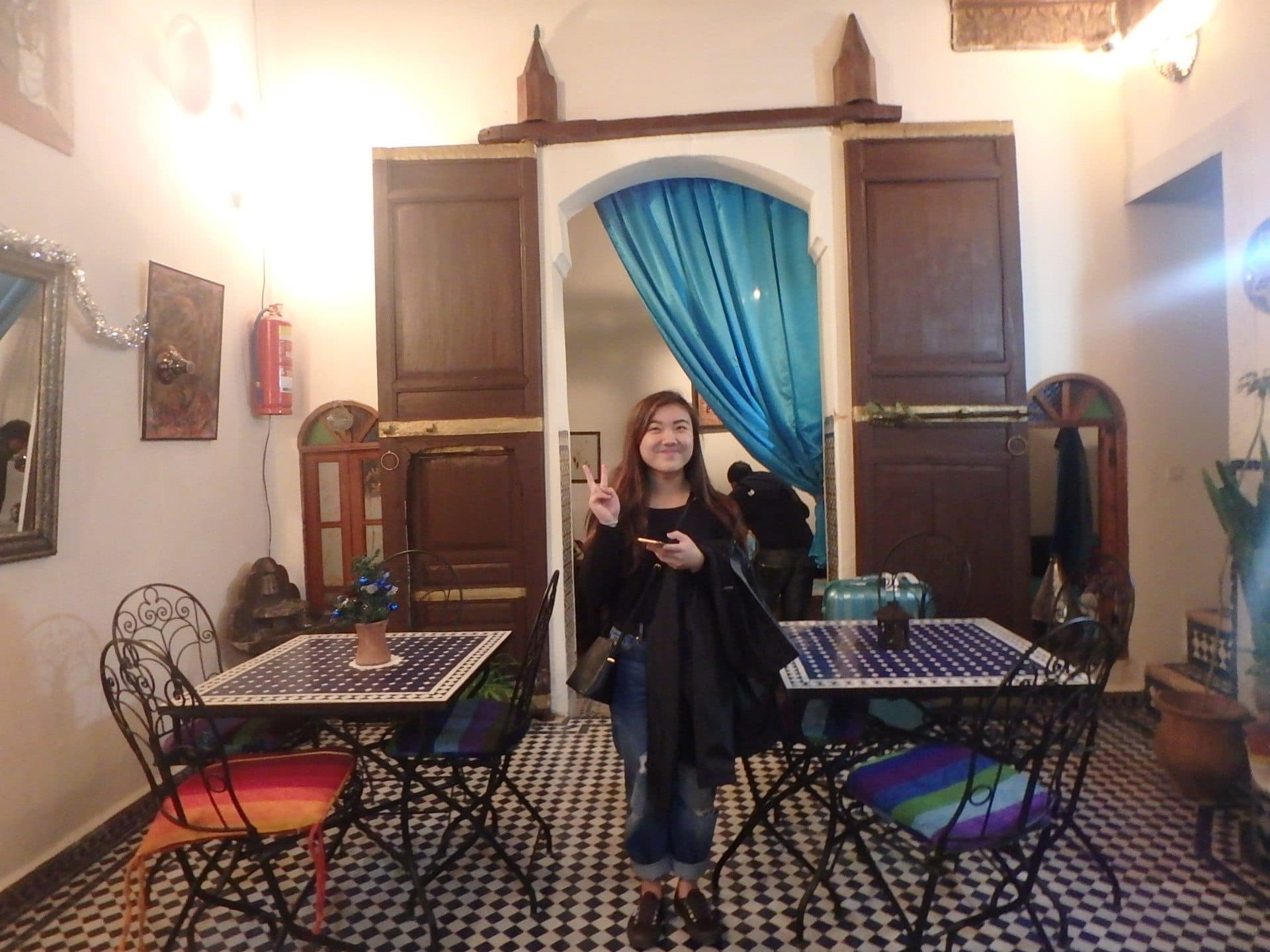 ede posing for the camera

We didn’t really plan much for the trip cause of the 3D2N tour that we already signed up for.

Anyway, headed to Meknes the next day just to see another city in Morocco. It was the first city/ town that we really explored, so everything was an eye-opener here. With all the street shops and whatnot, the place was hustling and bustling with people during the day in the Medina (city center). We went to the museum there BUT it was really nothing much LOL. Had our first tagines and couscous there too and it was delicious (but uhm eating it every day isn’t very nice LOL) By the time we wanted to head back, we found out we missed the train by a few minutes and the next one was in 1h++ time so we RAN like RAN RAN to the next nearest station (which really isn’t very near) so that we could take the next train that didn’t stop at the stop we were previously at. AND PHEW WE CAUGHT IT (lol that train got delayed so technically we didn’t have to run like mad.

They were selling the tagine pots

For Chefchaouen, we booked a car to bring us to and fro from Fes (4h+ drive one way) for 300dh! The view there made the long drive so worth it (technically I didn’t drive lah but still). Then again, I found out that the city was painted blue (and its retouched as well). Apparently, they wanted to put the city on the map so that people would visit them. (it was quite amazing seeing the effort they actually put into it??) and apparently, it started with the Jewish quarters before moving on to the entire city. So it was quite pretty!

THE BEGINNING OF THE BLUE CITY

SPICES ALONG THE SIDEWALKS

The next day, we explored a bit of Fes and their shop houses!!

AND FINALLY THE MOMENT WE HAVE BEEN WAITING FOR: THE 3D2N TOUR (170 euros! You can definitely get it cheaper if you’re doing Mrk to Mrk but it was more expensive from Fes to Mrk)

Frankly, I was not very impressed with the tour guide, who barely talked to us and didn’t really give us information about the place. The only thing he was interested in was probably alcohol??!? and I’m just like errr….. reviews said a lot of good things about their tour guides but I guess ours wasn’t really that good oh well.

Omg, this was so amazing. when we saw it in the distance, it really felt so so surreal?? LIKE OMG WHAT IS THIS BEAUTIFUL PLACE!! LIKE AM I SERIOUSLY HERE?!?! WOWZA Morocco is amazing!

yup. the ride took quite a while and we were asking questions about the desert and the camels and what-not. The moon was shining so brightly and lighting up the entire desert, it was so magnificent!!! We had our dinner at the campsite in the middle of the desert and had a lil campfire where we played some drums. It was truly quite an experience. Following that, we had a lil HTHT (not really lah more like jokes) session slightly away from the campsite and laid down to stargaze and it was super amazing.

We decided to climb the sand dunes to the peak of them all (BAD IDEA) IT WAS CRAZY OMG walking in the sand was tough but climbing up it was even more challenging URGH but successfully did it and everything felt super wow and I’m just like an insignificant being surrounded by sand and stuff. *oh and I got to Facebook my achievement HEHEH cause there was Wi-Fi at the top TEEHEE*

Got to see the sunrise the next day, albeit not entirely but it was still quite amazing.

Experienced like 3seconds of snow?!?!? LOLOL but the ride up the Atlas mountain was crazy NEVER AGAIN PLS HAHAHAHA also got to see how argan oil is made and apparently its THE BEST QUALITY LIKE THE BEST made by the women who live in the Atlas so it was quite cool (and if people are really into the oil, they should totally get it here cause its a lot cheaper than buying it in other countries?!? like argan oil is totally overpriced elsewhere what-even)

The place was very much similar to Fes but the night crowd was real HAHAHA there were so many stalls having the street-ish kind of food.it was so crowded. the workers were literally grabbing us into their stalls. lol and they gave us like the look when we ordered so little but uhm well??

Quite intense walking through this path

Am super super super glad things worked out and we could go to Morocco before heading back home (for myself) and other countries for the rest! And I’m quite glad to travel with these people. Super grateful for Momo who was able to speak French and communicate with the locals there for us and Midori for her Spanish. Plus a lot of the locals actually know a bit of Japanese??? It was really quite impressive lol. And I’m really quite glad we got to travel with our NTU friends. All in all, it was a really different experience and a unique one! Super glad to end all of my exchange travels with this trip.

#isdiyexplores signing off from Morocco