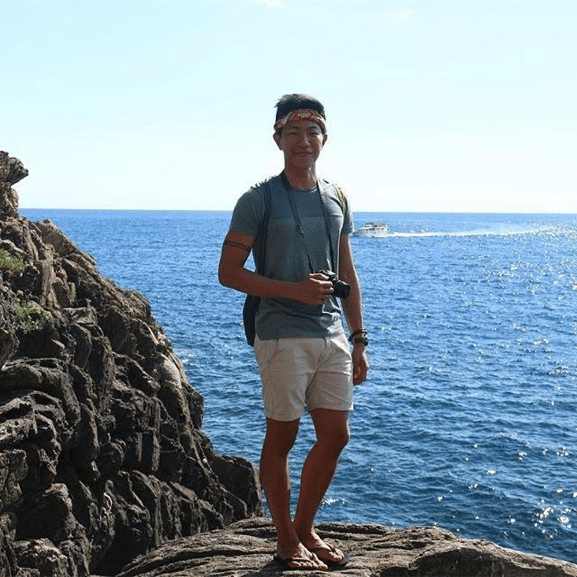 Joel, on exchange to Finland

Hei hei (that’s hi and bye in Finnish I’m not trying to act cute) I’m Joel and I did my exchange in Oulu, Finland. You could follow me @joeltkl or my hashtag #JOinFINityandbeyond to see more of my experiences over my 5 months there.
Prior to exchange, I backpacked around Europe with my friends and one of my favourite memories was made in Cinque Terre. It consists of 5 villages and this pic was taken in Riomaggiore. A train connects all the towns, or you could also hike between the villages if you’re feeling adventurous. (Tip: be prepared for A LOT of steps – it’ll be at least a 6 hour hike if you want to complete the whole CT by foot)

Syöte National Park, Joel at the highest point on a ski hill

Spent a weekend camping out at Syöte National Park. Only a 2 hour drive up from Oulu, this place is known for its mountain biking & hiking trials, and also skiing in winter.
In fact, this pic was taken atop the highest point on a ski hill which we laboriously hiked up 432m. The rewarding view of beautiful autumn colours was worth it though! (Tip: Iso-Syöte happens to be the Finnish region that gets the most snow so come in winter and you’ll be in awe of the vast blanket of snow that covers all the trees and landscape, transforming the park into a winter wonderland)

Nallikari Beach, just 2km from the city centre, is the number #1 attraction of Oulu by @tripadvisor. You could get here by bus or train or just cycle like what majority of the local Finnish people do. A convenient way to get around, and you get to workout as well! (Tip: get a bicycle! Definitely a worthwhile investment while you’re doing exchange here)

Joel, ‘discreetly’ moving down to the seats

Ice-hockey is the most popular sport in Finland so catching a game is a must while you’re here! Did you know Finland tops the podium in physical activity in Europe, and it also places among the most active countries in the world. Be prepared to be #fitspo ?? (Tip: get the cheapest standing tix and you can discreetly move to the better seats if unoccupied)

Joel, atop the Oulu Uni ball

So while (illegally) rocking atop the Oulu Uni ball, I just wanna say that “life truly begins at the end of your comfort zone” so when you’re on exchange – be prepared to make new friends, embrace new cultures, and have the best time of your life ?? wishing you all the best c ya’ll! ?