Seoul is surrounded by dozens of beautiful mountains, with different altitudes and terrains, catered to various difficulty levels. Nearing the end of winter, we took a day off the bustling city life, aiming to conquer Mt. Yongmasan – one of the most accessible mountains by the subway, with an altitude of 348m. Hiking is a lot more than a leisure activity here in South Korea, as an estimated of 1 in 3 Koreans hike more than once every month, so this is definitely something that we all have to experience on our exchange.

We started the trail from Yongmasan Waterfall Park (용마폭포공원), which is approximately a 15 minutes’ walk away from Yongmasan station’s exit 2, on subway line 7. You should then see a playground, with a basketball court. Just go around it, and that’s where you can start your hike. There are quite a few other trails, so you may want to do a little bit of research on how to get up to the peak via other options! The trial that we went wasn’t as easy as expected, as we found a slightly easier way with proper stairs/steps when we were on our way down (thankfully!). For that trial head, it was somewhere towards the end of the open carpark, instead of heading to the waterfall park area.

Follow the red arrows! and remember to stock up some food and drinks at the GS25 for a little party when you’re at the peak! Long way up, but thankfully the terrain was relatively easy (initially), with little elevation and firm rocks. I would highly recommend that you keep a close watch on the weather forecast before and during the day of your hike, as you wouldn’t want to be hiking on wet grounds, which will be a lot more challenging and messy during the ascend/descend.

After around an hour or so, we arrived at our first resting point, with a breathtaking city view of Seoul.

At the first pit stop, we observed a group of ahjumas and ahjushi (aunties and uncles) as they made some offerings with fruits and bottles of Sojus and Makgeolli. We weren’t too sure about the exact intent, but I’m guessing it’s for a safe hiking passage. As much as hiking is about exercising and staying in touch with nature, they thoroughly enjoyed the food and drinks with the other hikers, while immersing in their happy conversations. 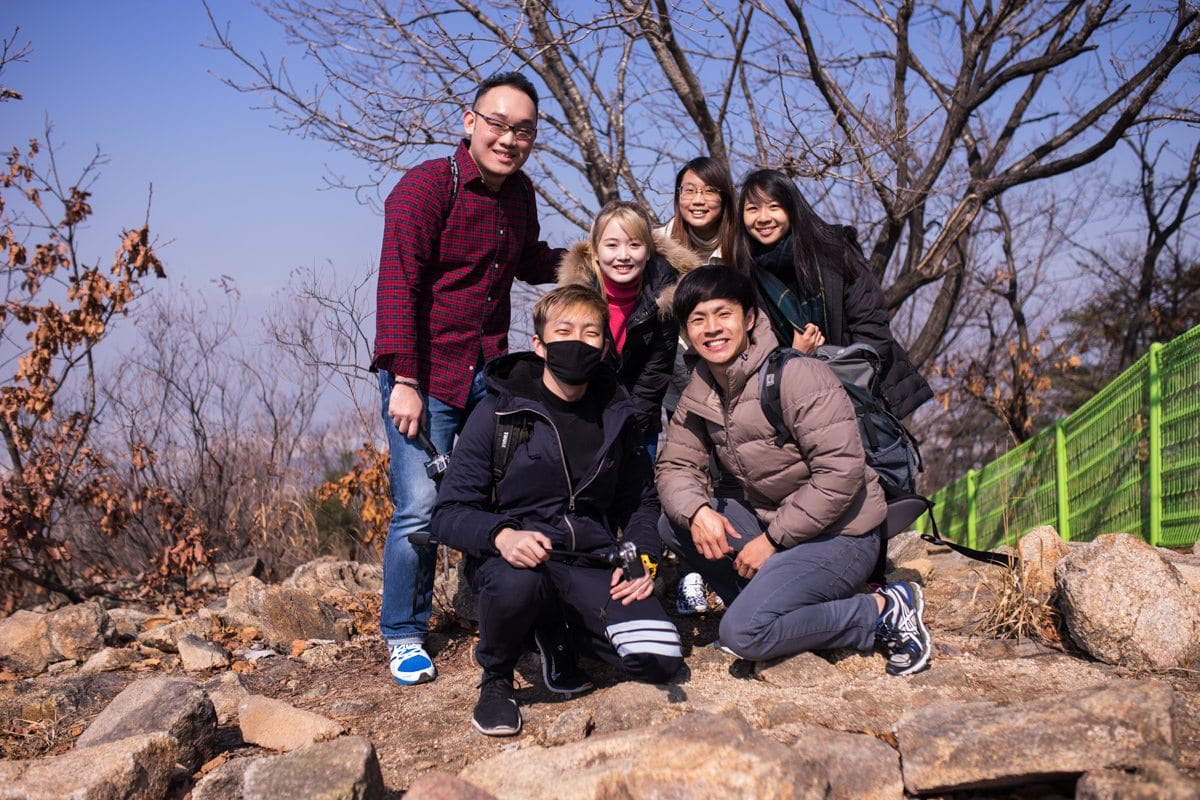 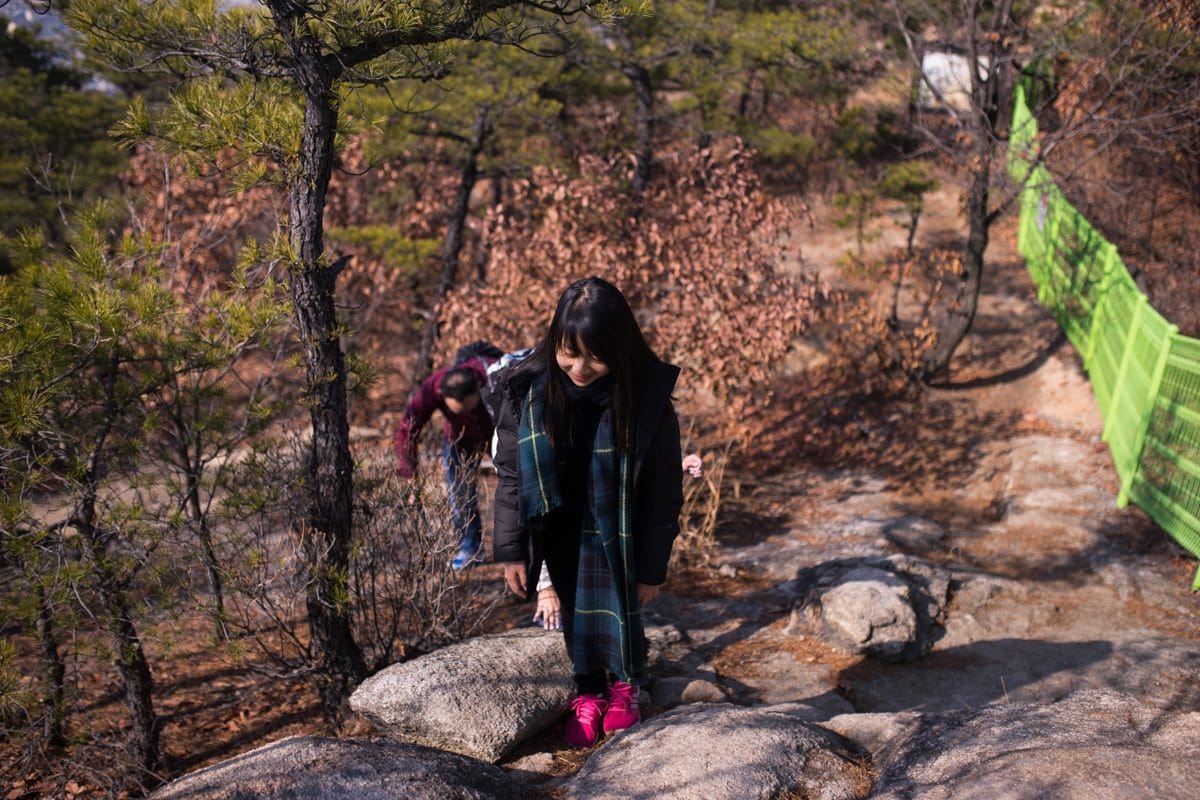 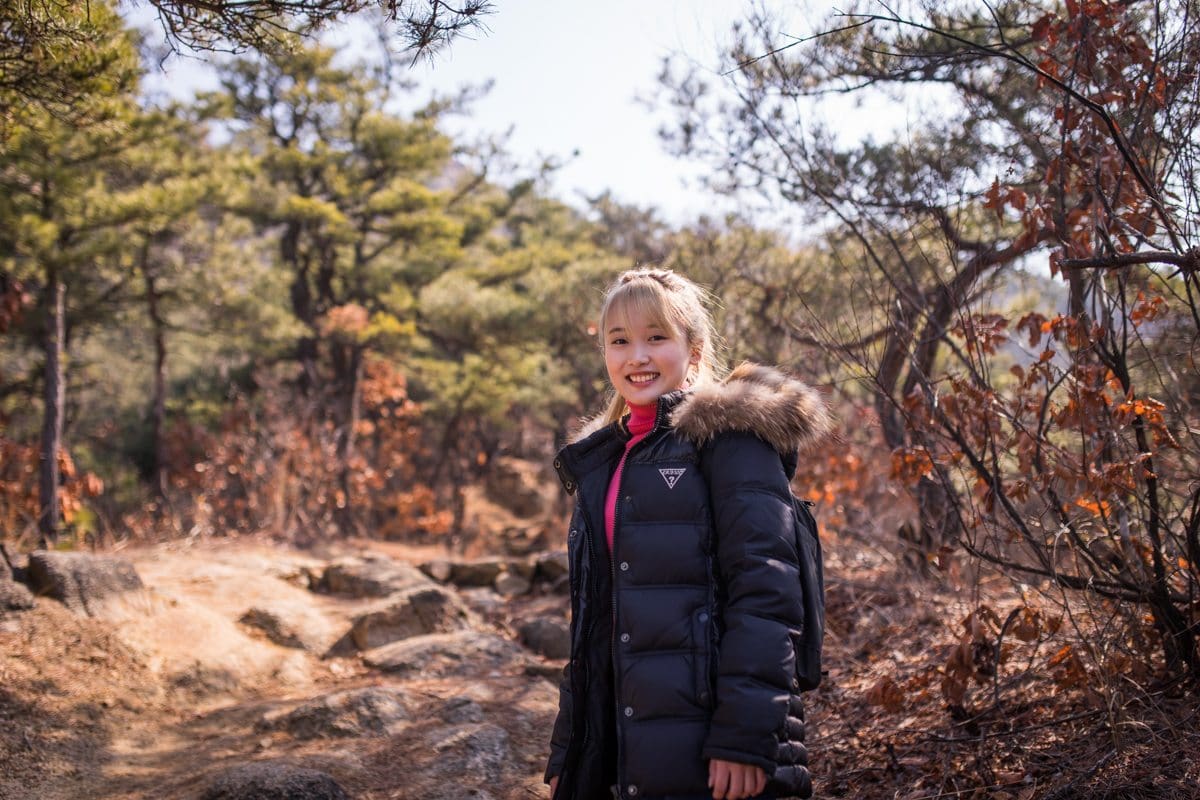 Further up north, where the elevation got steeper. But there’s always time for some pictures ya? 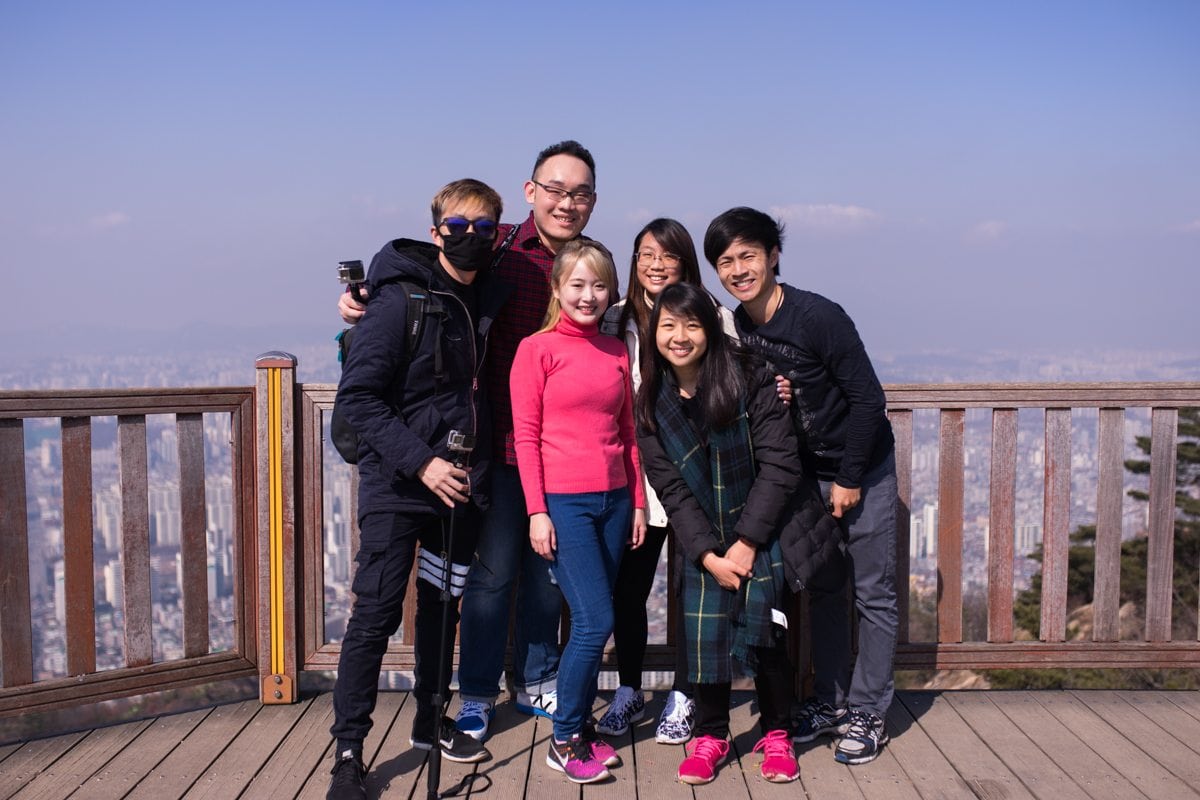 I’m always impressed by how they always seem to be able to find a way to stack the rocks so perfectly. And here’s us on an observatory deck, after another 45 mins of climbing. 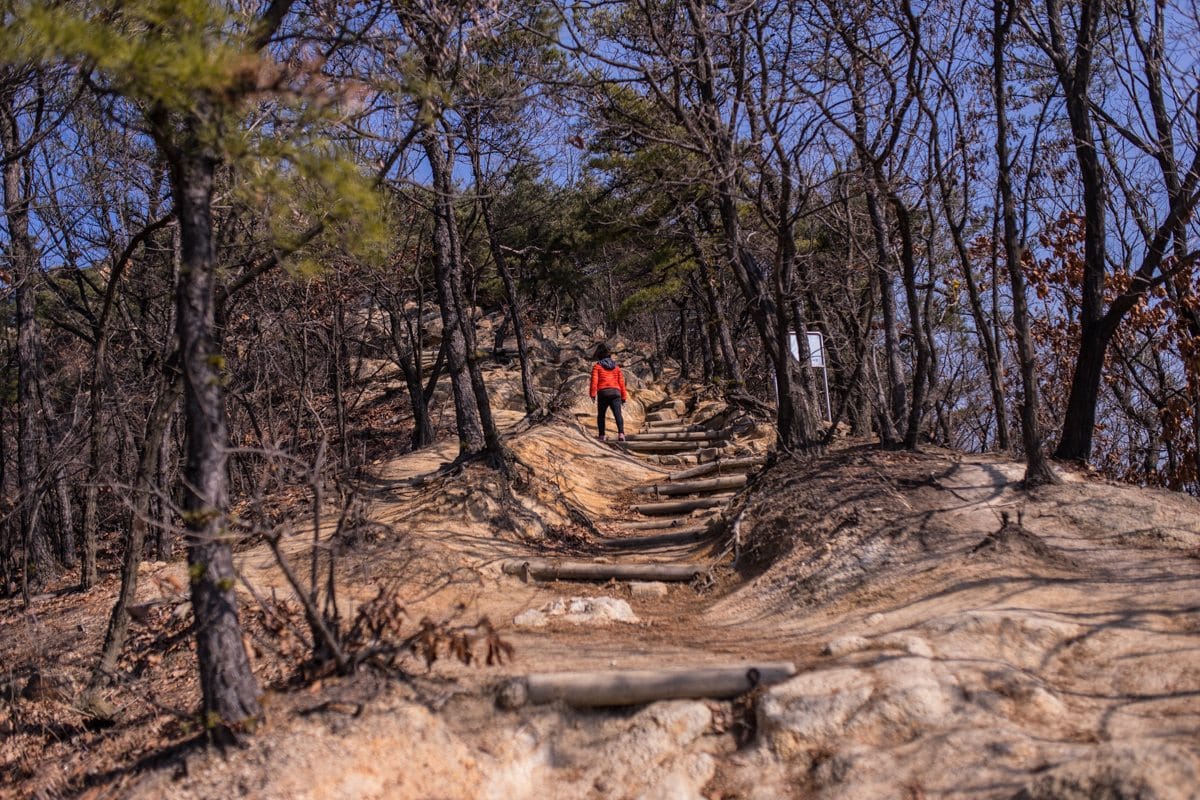 And finally, after 2 hours or so of climbing, and at times being on all fours as we may have gone the wrong route (whoops), we arrived at the peak! The air was especially fresh up there, which was something that we’ve been looking forward to. We chilled a little with our energy bars, bread, and snacks, before making our way down as it was getting a little too crowded.

On our way down, we met a friendly 70-year-old ahjushi who doesn’t look his age at all! He introduced all the various mountains around us, shared with us a little bit about South Korea, offered us some sweets, and also a cup of Americano which he brought in his thermos flask. I feel that one of the best experiences from hiking is that almost all of the hikers are super welcoming, and it really doesn’t hurt to greet them along the way as they’ll be more than willing to strike a conversation with you. 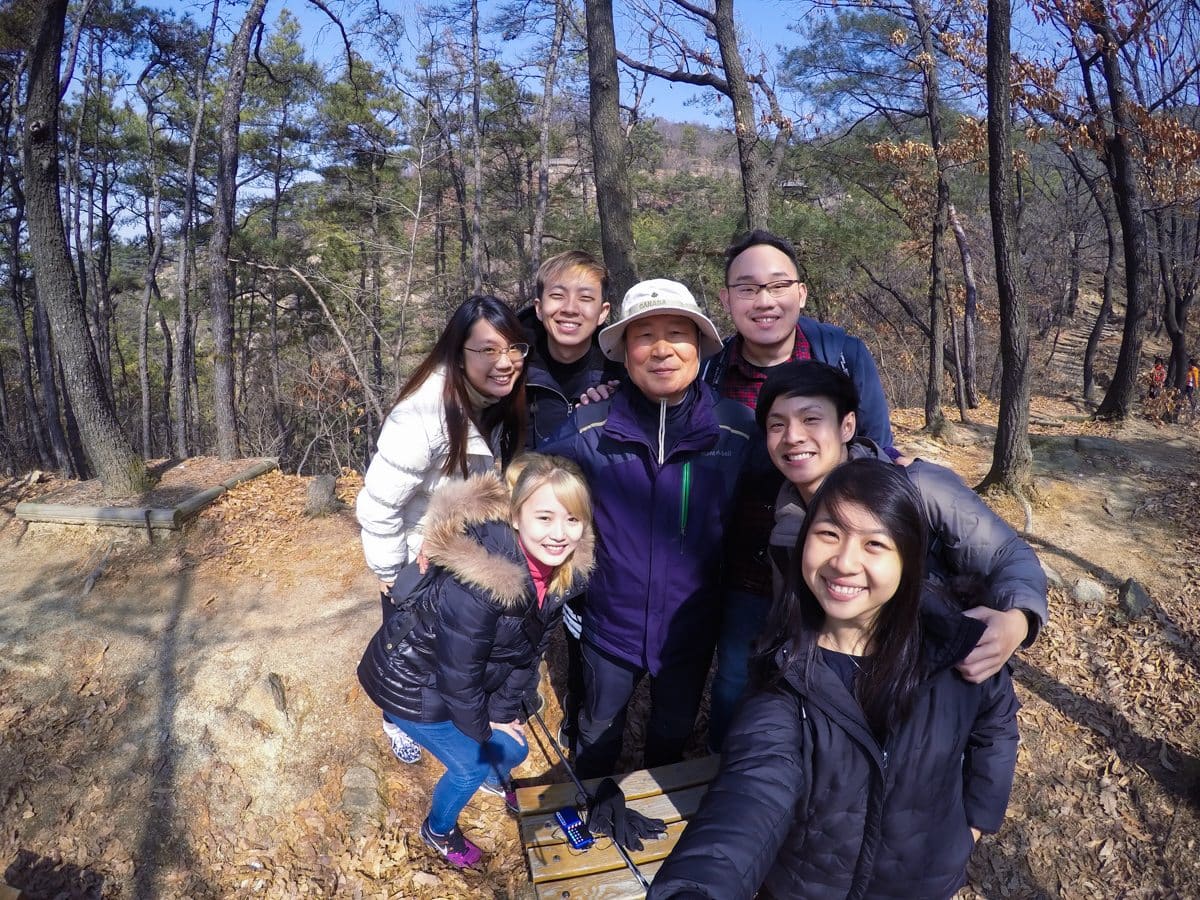 In terms of hiking essentials, you don’t have to do a full North Face, Columbia, or K2 gear like the Koreans, but a good pair of shoes (with good grip) is a must. Depending on the season, make sure you’ve dressed appropriately and at least have an extra windbreaker with you, as it may get chilly once you stop moving/climbing.

It’ll be good to avoid sleeveless or be in shorts as you wouldn’t want to be too prone to abrasions if you happen to slip and fall, or be a grand feast for the summer mozzies! And as mentioned, food and drinks are a necessity, but do control your water intake as there are usually no man-made toilets in the wild, apart from the starting point! All in all, stay safe, and I assure you that you’ll not regret going for a hike, regardless of how much your muscles will ache the next day haha.

Before I end this post, here’s a shout out to my fellow schoolmate, Wen Da, who will be documenting his South Korea experience in his vlogs. 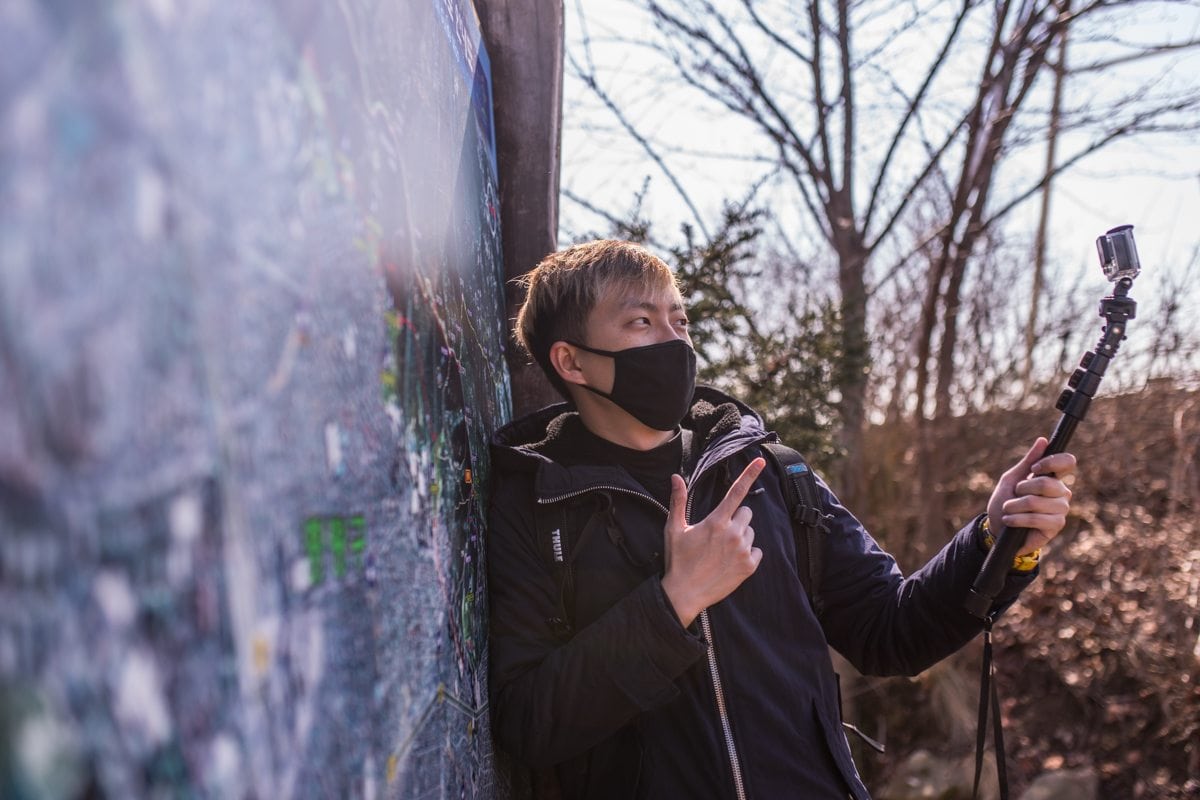 For more vlog content, you may visit the YouTube channel of one of our hiking mates, who is also a rising vlogger with hilarious videos hahaha