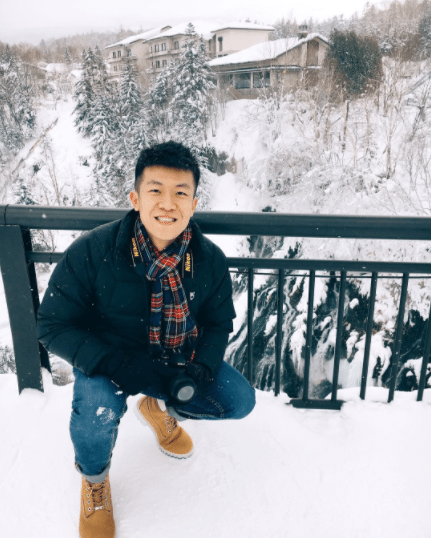 Hi everyone! I’m Siyang, a year 3 undergrad from NUS Chemical Engineering and my exchange university will be at Pohang University of Science and Technology, South Korea. As I will be having my reservist just 2 days after my last paper in Korea, the unfortunate me has to travel before school starts. For these 2 weeks, I will be exploring the land of rising sun, alone! Sounds pretty scary? Especially when you can’t speak their native language at all HAHA!

Here are some travelling tips in Japan: if you are moving among major cities, Shinkansen (bullet train) would be the most convenient way (albeit not very cheap about 200-300 bucks per trip). Fret not, Japan Tourism Board has this travelling package for foreigners like us. It is highly recommended to purchase a JR Rail Pass, it comes in 7, 14 or 21 days package where you are able to take unlimited train rides with this pass. It costs around 500, 600 and 700+ bucks respectively. For me, I got myself a 14 days JR Pass as I will be travelling almost the whole of Japan, from north to south.

It would be such a waste if you don’t try skiing in this winter wonderland! Hokkaido is one of, if not, the best and cleanest snow city in the world. Mount Teine is about 30 min by train from Sapporo station, a local bus will then bring you from the train station to the ski resort. It’s pretty accessible but do check out the bus timing beforehand. I must say this was the best day spent in Hokkaido! While rolling and falling down like a toddler, a familiar accent suddenly caught my attention. The warm feeling you got when you overheard someone speaking in English, or even better Singlish, was genuine happiness! I gave my most 灿烂的笑容 and asked “Are you guys Singaporean? ” It turned out that this group of Singaporeans were having their family trip in Hokkaido. Mark Chia is also an undergrad from NUS Business and to our surprise, we have a lot of mutual friends in fact! We eventually decided to YOLO and go up to the top of Mount Teine. And yes this photo was taking at the summit with an elevation of 1023m. Magnificent view and company indeed! Finally I can call myself a ski 男子 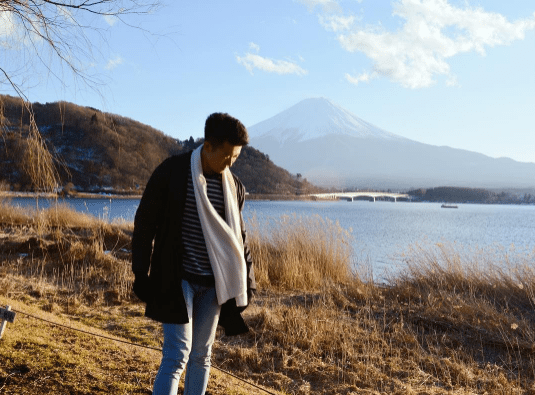 I was first greeted by the extremely complex metro system in the capital of Japan. There are more than 20 lines in Tokyo Station alone (compared to only 3 lines in our Dhoby Ghaut). You really need to be careful in hopping onto the right train, getting lost will cost you quite a bit of your time. Upgrading construction works are happening in most area in preparation for their 2020 Summer Olympics. This means Tokyo will be even more beautiful and advanced when you come to visit it in the future!

Fuji Q Highland is one of the most popular amusement parks in Japan with many record breaking rollercoasters! One being the famous 121 degrees backward drop. I personally feel like the drop is overrated, rather it’s the slow vertical ascent up to the very top that could make you question why are you doing this to your life.  The highlight of this trip was watching this magnificent Fujisan at Kawaguchiko lake, and facetiming my family and friends back in Singapore. Most of the time this snow capped volcano is covered by thick clouds, I’m just so fortunate for the clear blue sky on that day. So here I am, enjoying the most beautiful sunset in the land of rising sun. Kinda in love with both the hustle and bustle, and the serenity of this city. 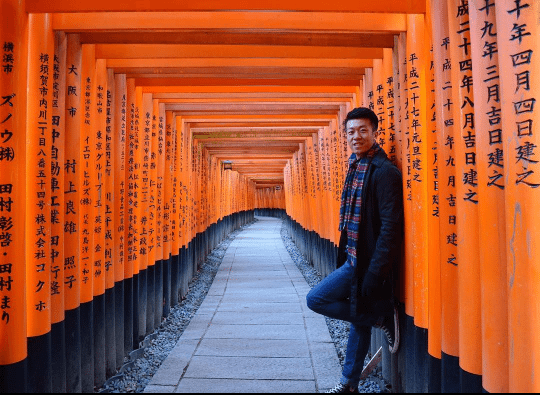 Kyoto was formally the Imperial capital of Japan for more than one thousand years, before the seat of emperor was transferred to Tokyo. Over the centuries, Kyoto was destroyed by many wars and fires, but due to its historic value, the city was removed from the list of target cities for the atomic bomb and spared from air raids during WWII. It is well known for its quiet temples, sublime gardens, and colourful shrines.

I would like to first promote my capsule hotel: Centurion Cabin & Spa Kyoto, located next to Shijo Station, 4 min train ride from Kyoto Station. It costs about 30+ per night and it includes onsen (both hot and cold), and sauna in the hotel! Its capsule is rather atas, equipped with a TV lol I’m really damn impressed by the facilities here as compared to those apartments which only has a small cubicle for shower, and the space is damn cramped. Every night I just can’t wait to get back and dip myself in the hot onsen and sauna (which also has a TV). Yep must stay here if you are coming to Kyoto highly recommend. Here’s a photo of me going to the Inari at 730am to beat the crowd. By 830 the crowd is quite crazy already so if you don’t like to be photobombed you can sacrifice a few hours of sleep and reach there early! There’s a mountain to climb and you can just follow everyone up the same path. While for me I kind of lost my way, lol (maybe it’s a blessing in disguise) and took the path less travelled, eventually reached the top as well! This is a must visit place if you are coming to Kyoto because it is where emoji comes to life 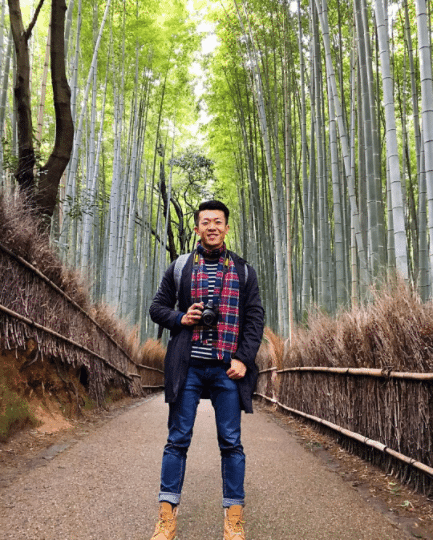 Arashiyama is a touristy district in the western outskirts of Kyoto. It’s usually more popular during the cheery blossom and autumn, around early April and and late November period. With its bamboo forest being the most popular attraction all year long. I guess it isn’t too bad to pay a visit to Arashiyama during winter time. If you are lucky, you will be able to see falling snow! The scenery is insanely beautiful when you view it from the observation deck. Arashiyama is quite a huge area to tour around so you may want to dedicate at least half a day for it! You don’t really need to visit it early in the morning. Take your time slowly explore the various temples and paths, because no matter what, there will always be crowd in Kyoto. Kyoto is normally much colder than Tokyo, the chilliness can even fight with Hokkaido, just that there isn’t much snow but strong wind throughout the day. Keeping warm is the key to a pleasant trip in Kyoto! Enjoy your weekend guys! 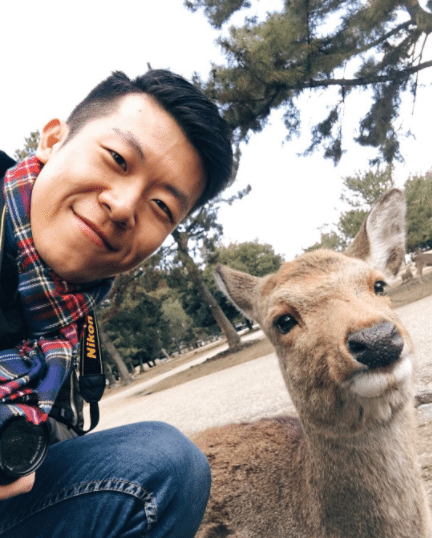 Nara Park is about 50 min by train from both Osaka Station and Kyoto Station, relatively convenient to get there. There is quite a distance to walk from the Nara Station to the main park. Along this stretch, there are many shops selling various souvenirs and macha muachi. This will make the walk up to the park less hungry and boring. As most of you would have already known, Nara Park is well known for its deer. There are around 1000 deer roaming freely around the park, regarded as messengers of the gods in the Shinto religion. In fact they are literally everywhere! Deer crackers can be purchased at 150 yen (SGD $2) per packet. They are really friendly creatures, extremely polite. They tend to nod at you as a gesture of asking for food. However after feeding them they will pretend like they have never met you before. Very ungratefulOne advice is to hide your food well, only taking out one biscuit at a time. This is to prevent dozens of deer from surrounding you and trying to sniff all around you for food. If you are lucky, (Yes I am!) you will be able to witness some live wrestling among them. Their antlers are used as a way to attract females and also for male-to-male competition. However, their fights are really brief, park keepers will soon be there to break them apart. Sometimes deer will also cross the road on their own. Vehicles will stop immediately and patiently wait for them to reach the other side. They look like they are the king of the road when jaywalking. Dedicating half a day would be enough to feed some deer, selfie with them and visit some temples, especially the Todai-ji Temple, an UNESCO world heritage site. 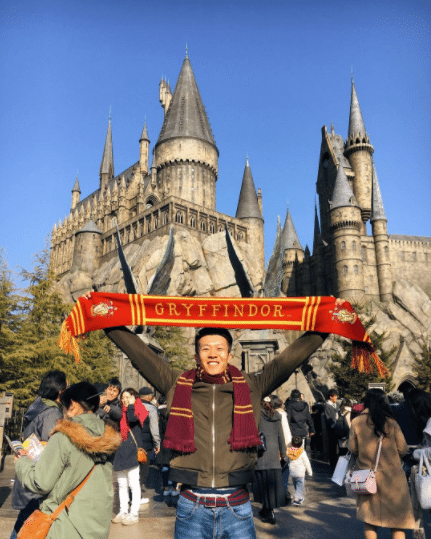 On the last day in Osaka, I decided to visit the USJ since it is just 10 min away from the Osaka Station by train. This is a place you MUST visit if you are a huge fan of Harry Potter! Instead of rushing for the most popular Castle ride, the first thing I did in Hogwarts was to purchase the iconic Gryffindor scarf! It’s rather costly for a piece of cloth lol but it gave you the identify and pride when you walked around in it. The HP Castle ride was my favourite! From playing Quidditch to fighting Death Eaters and the snake of Slytherin, every action was a highlight in the HP series. However it’s a little weird to hear Dumbledore and Harry speak in Japanese tho . After the ride you could spend more time in the shops along the Diagon Alley. From Hogwarts uniform, sorting hat, Hedwig soft toy, wands, Nimbus 2000, to sofa cushion, cardigan, towel, photo album and key chain, I was so fascinated by them that I spent around a total of 2 hours in various shops. Hollywood and Jurassic rides are pretty exciting too, try them if you are looking for some thrills. This year, USJ is celebrating its 15th Anniversary! I was so lucky to witness the parade today! It’s kinda like our Chingay but much more lively and energetic! Different themed 花车 such as Hello Kitty, Snoopy, Hollywood, Jurassic Park and Sesame Street would tour around the whole USJ, with live performance throughout the celebration.

With this, I conclude my one week of ExchangeBuddy takeover. There are many ups and downs during this solo trip, and I’m just so glad that I took a leap of faith by visiting this beautiful country before exchange starts. Because in 20 years, you will be more disappointed by the things you didn’t do than the things you did do. Every experience is a piece of memory to be remembered. As cliché as it sounds, take every chance you get in life, because some things only happen once. I will continue my journey to Hiroshima, Fukuoka, Busan, and finally Pohang. It’s been my pleasure sharing my journey with you guys here! Siyang, out!