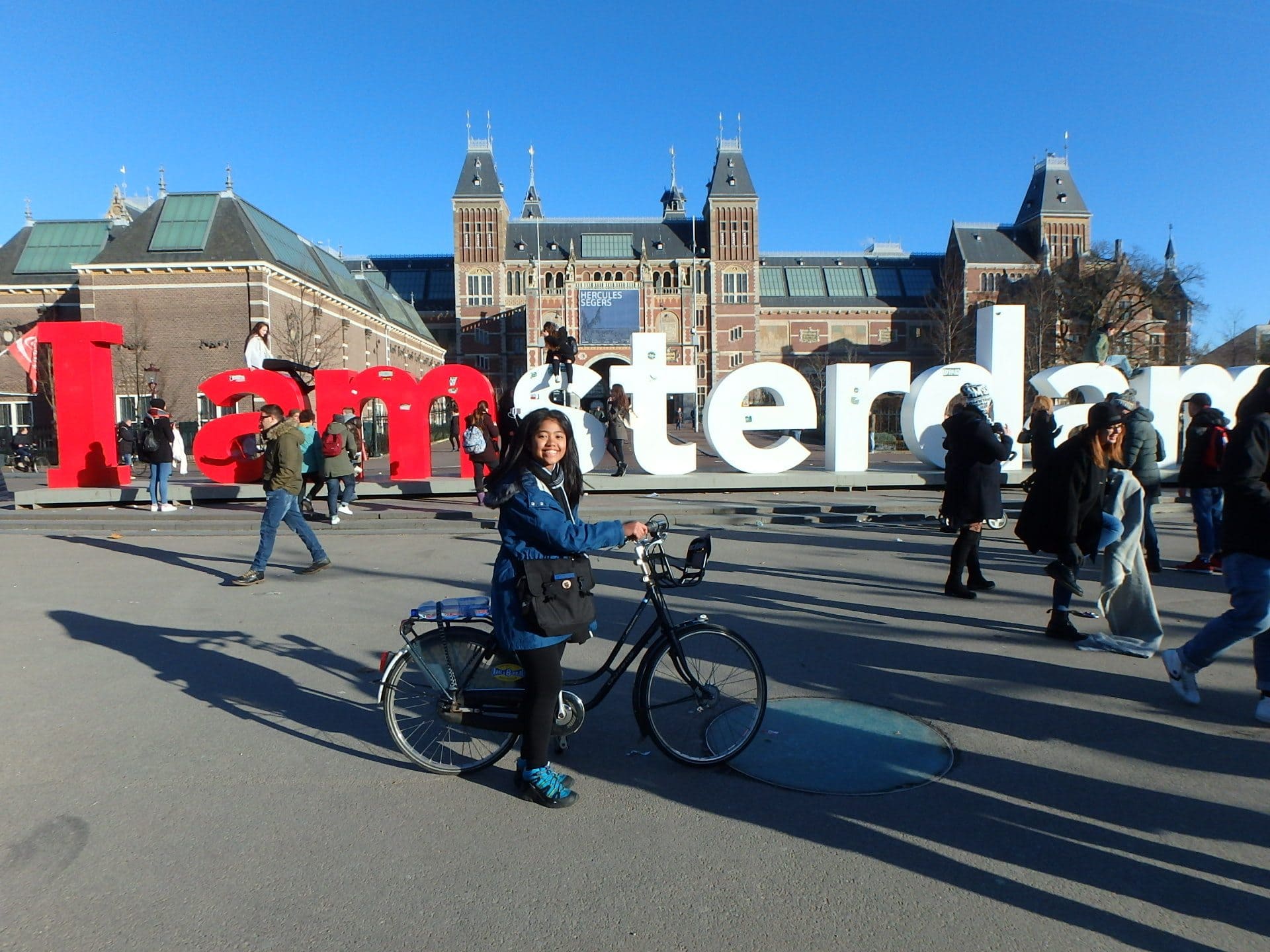 The flight was at 6 am (so I left the house at 4 am OMG) and arrived in Brussels at 9 am. Following that, took a train down to Bruges as I was gonna be spending the night there. Arrived in Bruges around 11 am which was perfect timing for me to explore the place and I’ll be sharing all these travel tips here! 🙂

one word to describe it: BEYOOTIFUL. Super glad I decided to make the trip down to Bruges and really everywhere was just super nice! especially this cute architecture that looks like it came out of a fairytale book or like a dollhouse for that matter.

Even at night, it felt like it came straight out of a fairytale WOWZA

It had like plenty of canals nearby as well so we decided to take a little boat trip to see some parts of Bruges that were harder to capture on foot. 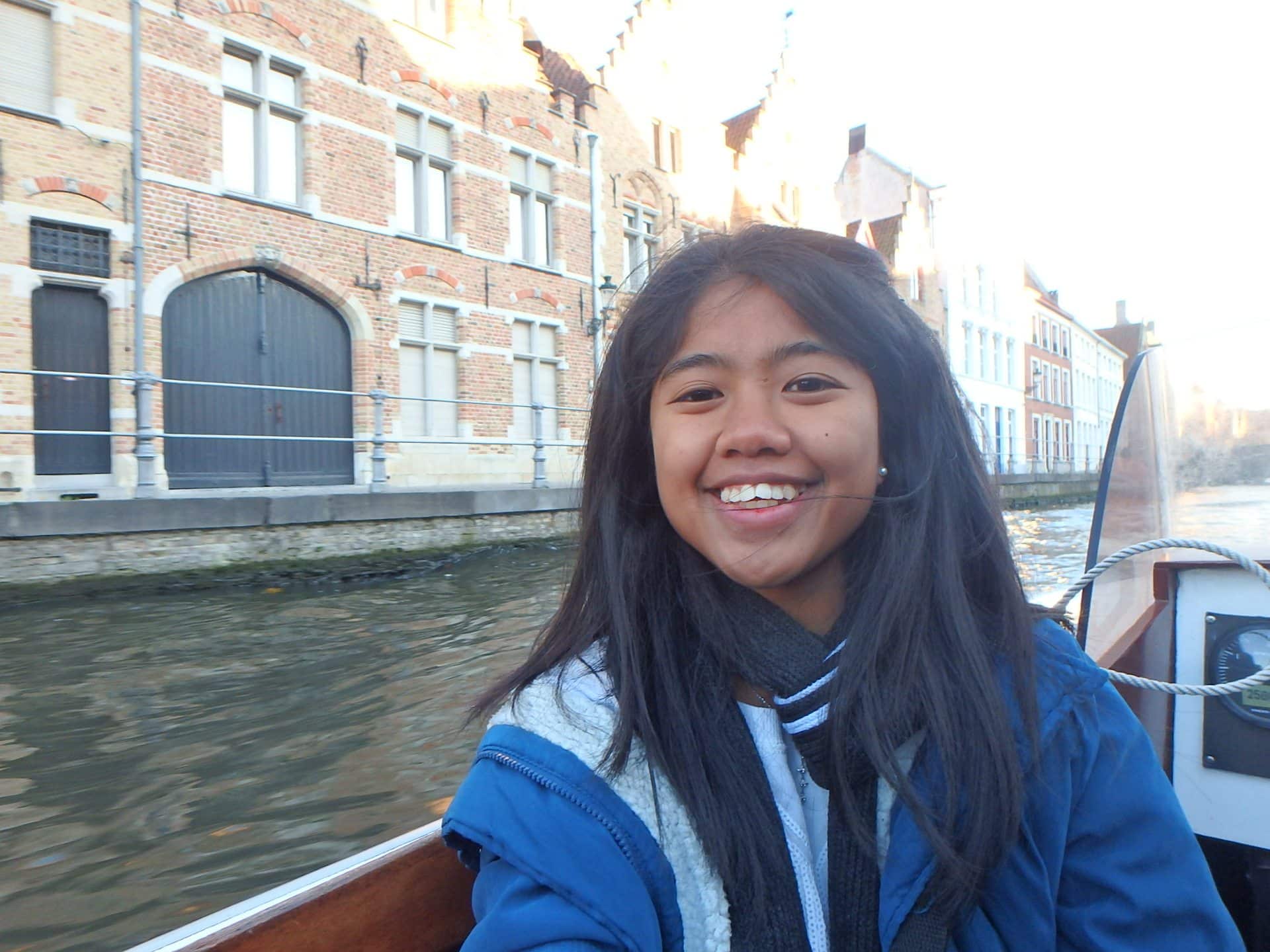 Ate the sandwich ice cream because it was recommended on exchangebuddy although I was just a bit disappointed the cookies were an overkill to the ice cream taste ): but it was nice I guess!! Also, did you know speculoos is from Belgium so DUH obviously I got that flavor HEHEHEH. Also, meringue was great omg but I only had the caramel flavor but okay it was gooooood.

Next day headed to Ghent for a day trip before going to Brussels to spend the night there and IT WAS SO SO SO BEAUTIFUL AS WELL omg. A lot of the websites I read on it says it’s a must go and how its a university town but I don’t think it’s just a university town. It’s really quite nice and there’s quite a bit of history to it as well!!!! like how they used to have so many beer breweries everywhere and how apparently even the kids would drink beer because it was a lot safer to consumer beer than water (IKR??) yeah so it was quite an interesting walking tour (even though I was lugging around my oh so heavy backpack LOL) AND AND had my first Belgian waffles!! 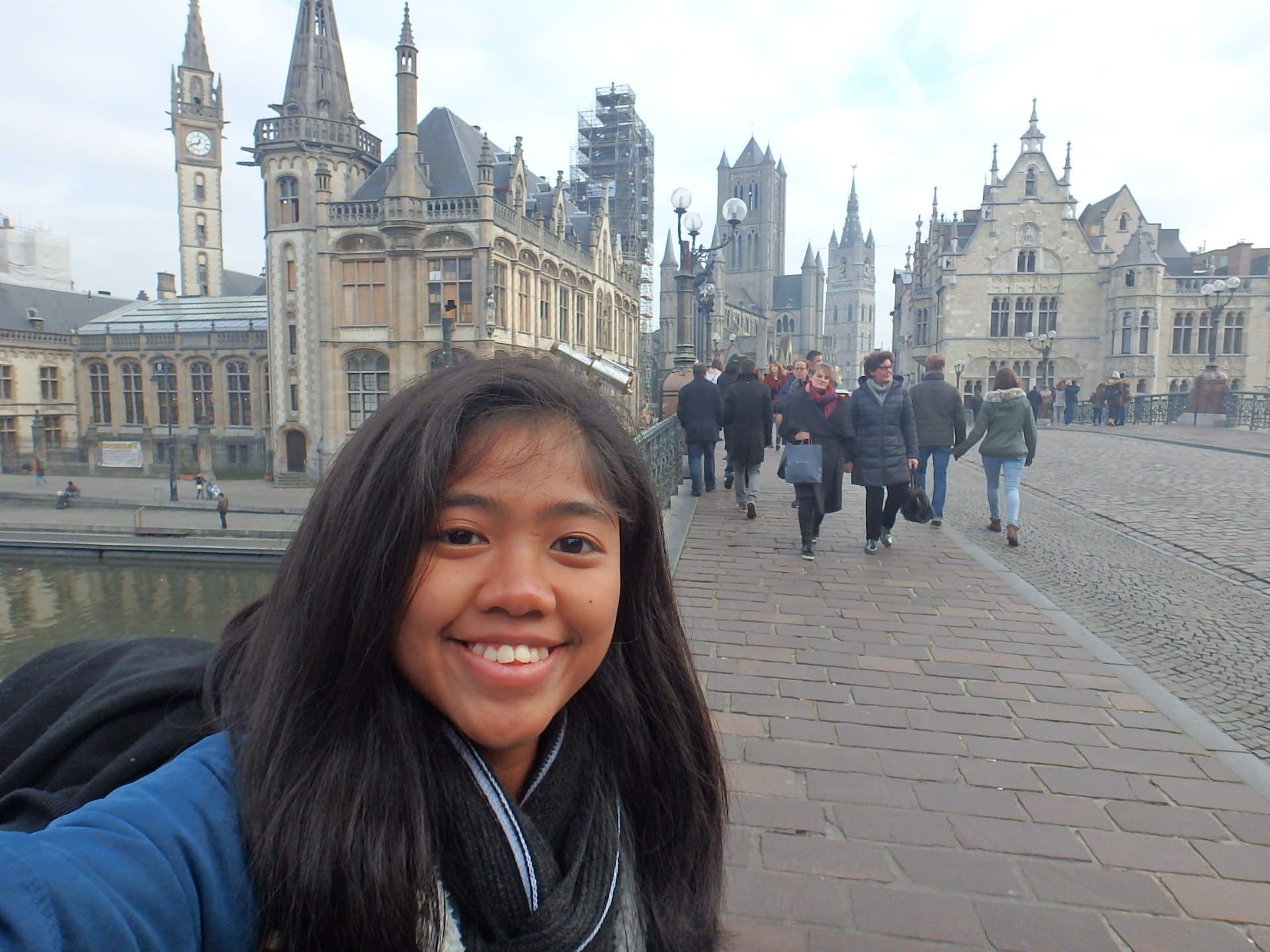 the face of a tired traveler ahahhaha

SO NICE OMG. plus never knew all these houses had such rich history behind them.

Somehow really love the vibes in Ghent more than Bruges but they are both so so nice!!!! I couldn’t stay there long as I was off to heading back to Brussels for my accommodation since it was a bit to expensive to stay over in Ghent. Took a BlaBlaCar and had a good experience as the driver was really nice and explained clearly where to meet (esp since I didn’t have wifi and like data OH THE HORROR) but yeah all turned out great.

When I arrived in Brussels, headed straight to the hostel to complete my group project LOL (being the responsible group member I am)

Next morning, I headed to Amsterdam (Netherlands) on FlixBus!!! And experienced a nerve-wracking incident!?!? So basically, I greeted the bus conductor and thought it would be a good idea to leave my backpack in the luggage compartment at the bottom of the bus. Before heading up, I took out my laptop (just in case I got bored and could watch some Friends episodes on the way there). Boarded the bus and saw that there was a charging plug so I went down to get my chargers. But when I went down to look for my bag, it wasn’t there anymore?!?!??! Then next thing I know, some dudes from the bus came down asking me ‘Was that your bag????’ and I was like huh??? then they started chasing after a guy who was running away with my backpack!! I was super shocked and then started running after the guy also!!! The guy gave up and left my backpack on the ground and fled. Quickly picked my bag up and the bus conductor was calling for us to come back. BUT OMG I WAS SUPER LUCKY THAT THE DUDES ON THE BUS WERE LOOKING OUT THE WINDOW. if not, I probably would not have a backpack and Idk what I would do after??? WHAT AN EXPERIENCE MANZZ. 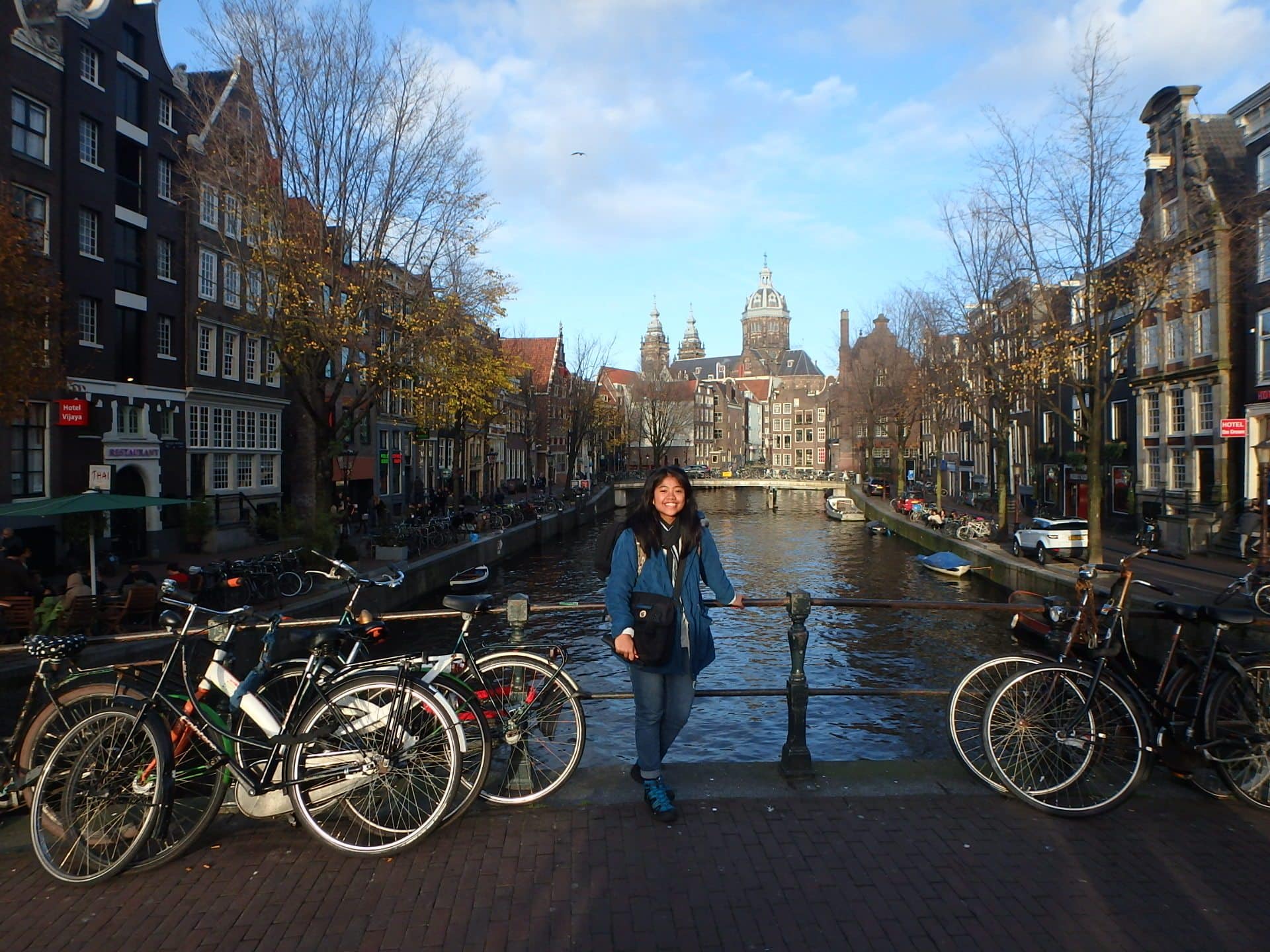 So mainly walked around and explored the place.The smell of weed was everywhere and they have a lot of magic products LOL like magic cupcakes/ cookies etc, which was quite an eye-opener. Their ‘coffeeshops’ are also mainly like for people to smoke weed so like imagine the door opening and the strong scent hits you.

Cool travel tip:  even got to cycle around for a bit!Cycling around Amsterdam was fun doing it like the locals but it was coooooooold especially my hands (LOL THEY WERE FREEZING) but yeah im glad I did it 🙂 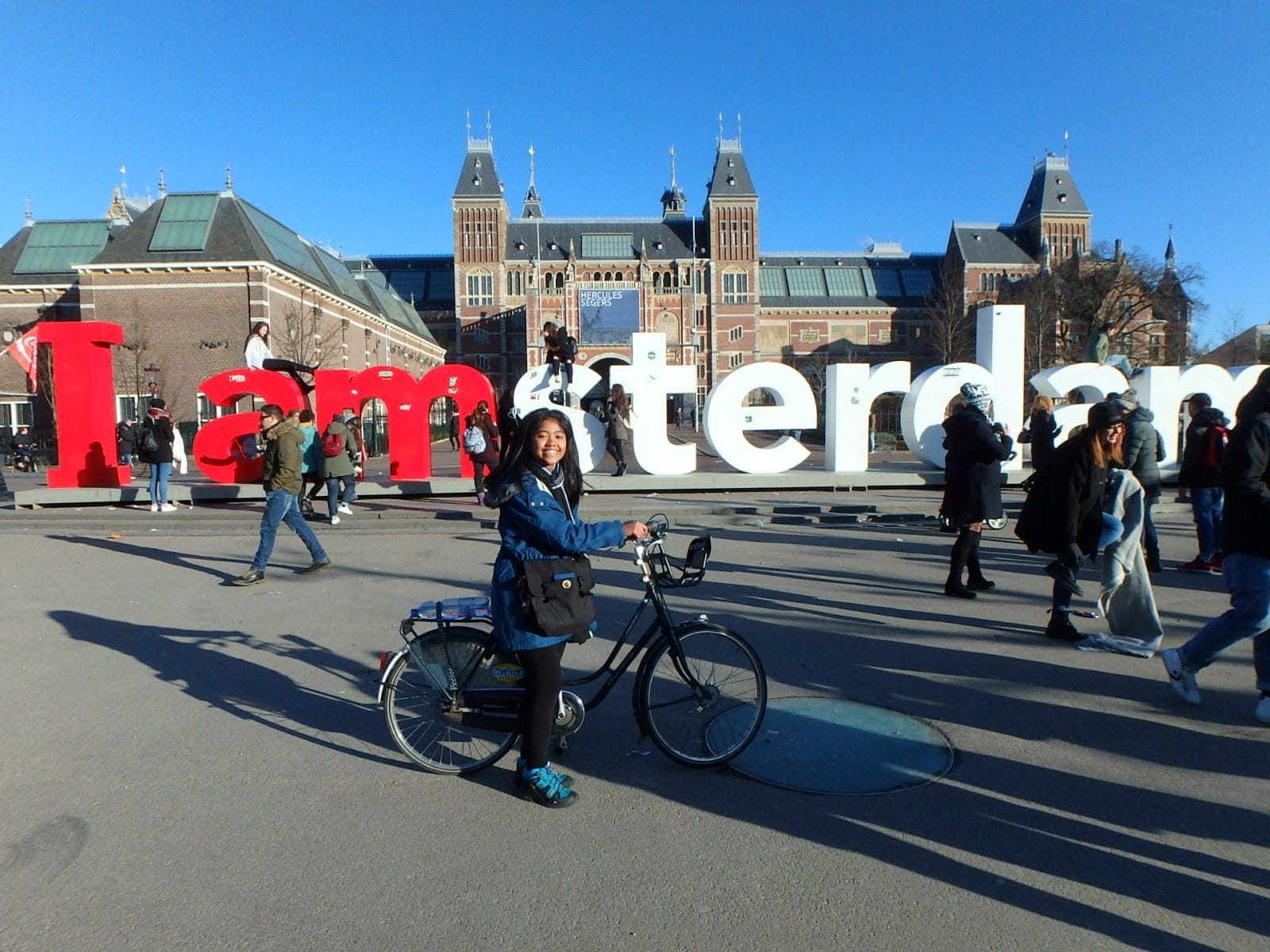 And I was lucky enough to witness the King and Queen of Belgium coming down to Amsterdam for a visit!! TEEHEE.

Headed for Brussels in the evening because I wanted to catch some Christmas market before heading back to Barcelona!! AND IT WAS SPECTACULAR like the view and the vibes! (esp since its considered my first Christmas market in Europe ever)

So, traveling solo for the very first time was quite terrifying for me. I don’t know how people/ backpackers are able to do it throughout like for 3 months kind. Constantly meeting new people can be quite tiring BUT I realized it can be quite fun and you really get to talk and learn their stories in a way that would be very much different if you’re traveling in a group. I couldn’t really plan that much because of school projects that had first priority so I was very much nervous about the trip but I guess I was nervous for nothing. The trip turned out fulfilling and I was able to see so much within the 5 days. (not museums of coz) and at the same time, I was able to kinda somewhat reflect more about myself as a person. Having said that, it also got me to question myself if I should still go for my Germany trip and was going around asking people if I should just forgo my tickets or still go ahead with it. I sound so cowardly LOL but yeah, I guess its really because I am not very used to it and seeing all these amazing views and stuff ain’t as great as when you have family/ friends with you. so yup. BUT YAH MORE ON THAT IN MY NEXT POST (because I DID MY GERMANY TRIP AFTERALL HEHEH)