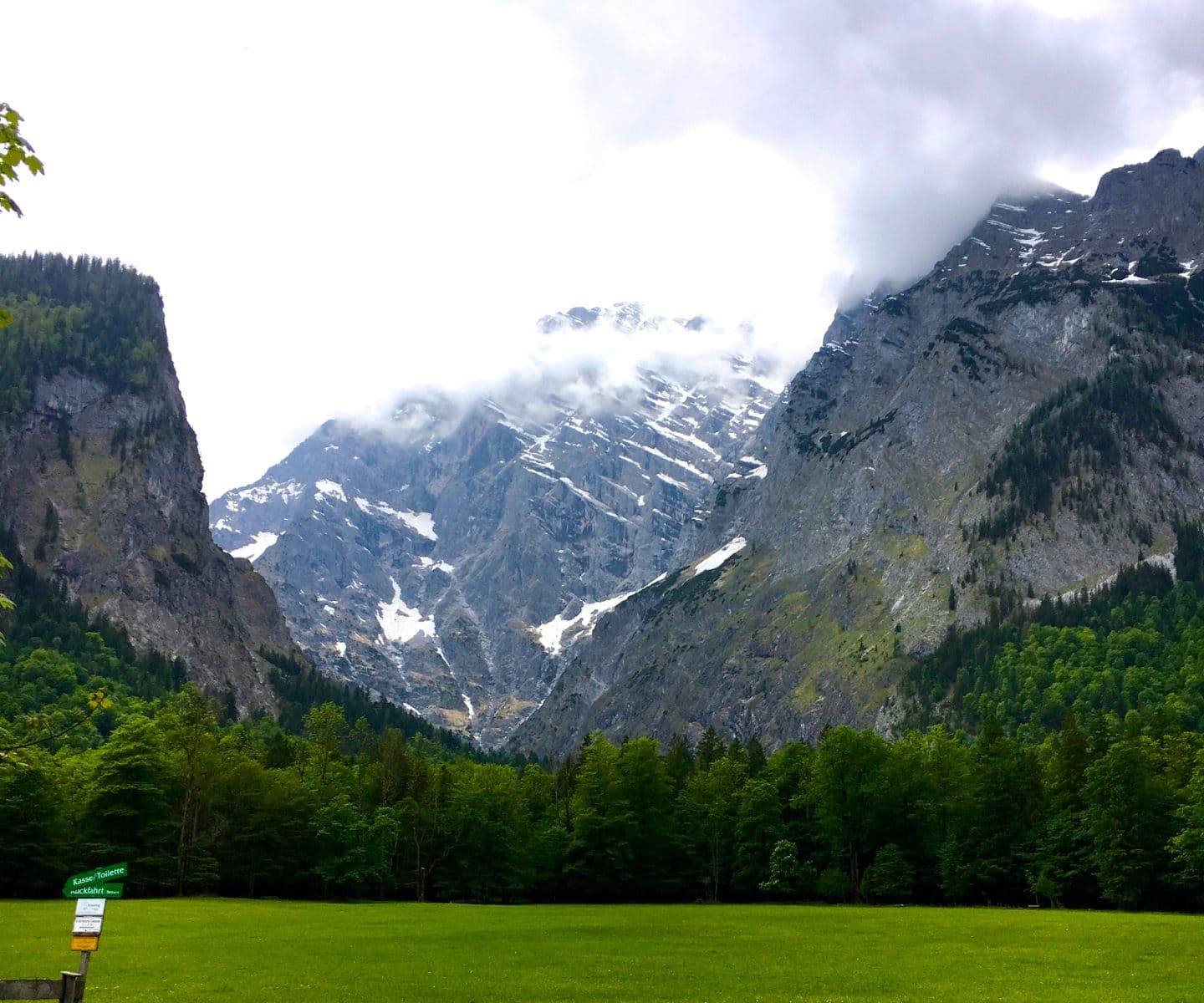 Munich is considered the starting point of the ‘Mountain Route’ which has captivated thousands of hikers from all around the world. Having set the month of June to be a ‘Explore Munich’ month, I began my hiking journey around the Bavarian mountains with Berchtesgaden and Königssee.

When the setting sun rays gleam atop the snow capped mountains, as if all in the world was right again

I signed up on this hiking trip with Tutoria. It is a student organisation that plans trips within Germany (and sometimes out of Germany) for exchange students in LMU (Ludwig-Maximillians-Üniversität München). A good tip when you are on exchange in Munich/Germany is to look out for programmes like these. They are, namely, Tutoria, MESA and the Service Package (if you are from NUS).

Berchtesgaden was definitely a good pre-cursor for my upcoming hiking trips. This is because the gradient of escalation is relatively gentle as we were trekking up the hills in the national park.

The air was crisp, the view of the Bavarian mountains was spectacular and it never failed to capture that split second from my mind. Something about those snow-capped mountain tips, the grandeur of its majestic stature, sexy even, and the fresh-green gently cascading hills that settle below their feet that takes your breath away.

At that moment in time, everything fades away and you become one with nature. Perhaps this was what Lao Tzu, an ancient Chinese philosopher, meant in his philosophical writings about the essence of being connected to nature.

Instead of being just beautiful wallpaper, I think it reminds us that the world is much bigger than we are. Life may become as inspiring as the mountains when we open our hearts and minds. Just like the wide open fresh meadows, we can be more open to the people around us.

Our hike brought us to the charming little Windbeutelbaron Gasthouse, snugly tugged on a ledge of a hill. There we were presented with just about the prettiest dessert I have ever eaten.

Windbeutel is actually a German cream puff pastry and it is mainly eaten with freshly made cream.

A Different Kind of #foodporn

Two airy cream puffs, a cooling scoop of delicious vanilla ice-cream with cherries cascading from the sides; it was too beautiful to be eaten. The cream was fresh and milky without that starchy aftertaste you get from can-squeezed cream. The sad thing was, most of us could not finish the entire dessert. It was really huge and there was a little too much cream to stomach down. At least my camera was full 🙂

Fluffy home-made whipped cream right from the Bavarian mountains, where the fresh alpine air boasts the freshest of milk, was indeed a sweet touch to the beginning of my hiking journey around the Bavarian pre-alps.

The very next day presented us another jewel within the Bavarian mountains. We were brought to Königssee, a lake nestled between mountains and the only place in central Europe that represents the fjords we often see in Nordic countries.

Mystical with water clear as glass

I think what really brought goosebumps to my senses was when the boatman played a melody from his trumpet. The notes echoed off the walls of the mountains surrounding the lake. In addition, it was a little cloudy that day but the shifting clouds added to the atmosphere of it all.

I felt like I was Frodo Baggins returning the ring of power to Mount Doom, with some dramatic music playing in the background.

Ok, it wasn’t quite this dramatic but it came pretty close.

Our boat ride brought us to a little charming island right in the middle of the lake. There is a little church called St. Bartholomew, a fishing house and a restaurant on the island.

While I went on this hiking as part of an organised student group, getting to Berchtesgaden and Königssee is very achievable.

You also have the option of visiting the famous Eagle’s Nest, located in the vicinity of Berchtesgaden National Park. The Documentation Obersalzburg is also a good historical museum to visit should you be interested in German history during the Nazi times. What is interesting about this Documentation Centre is that you get to see snippets of Hitler’s life that you won’t see in history text books. Buses that lead you to the Eagle’s Nest is right around the corner from the Documentation centre which makes visiting both places very convenient. In fact, the mountain views from the Documentation centre is already beautiful enough.

Some links that you will find useful:

I hope this short post will inspire you to allow yourself to be awestruck by nature and appreciate it from beyond your wallpaper.

These mountains can sometimes do magical things to you without you even realising it.

Look out for part two of my “Bavarian mountains” series where I will be going on a hike in Heimgarten! Auf wiedersehen!