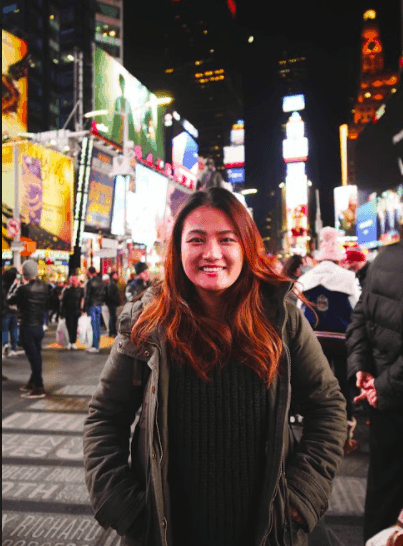 Happy New Year from NY! My name is Xinyu and I’m a year 3 NTU Wee Kim Wee student. I went to the States for an exchange in Philadelphia and I would love to share with you about my journey; The beautiful sights I’ve witnessed, the warm people who’ve touched my heart, and the delicious food that gave me a food baby. My school, Bryn Mawr College’s located in Philadelphia on the East Coast. Being in the suburbs was definitely a challenge as I am a city girl at heart. However, the rustic English architecture and peaceful greenery really gave me a good break from the city, allowing my mind and lungs to take a break for sure. I lived with my roommate, Sylvia in Erdman Hall and immersed ourselves in the multitudes of traditions. In particular, we attended Lantern Night, a tradition where we put on cloaks (just like in the Harry Potter movies) and went through a ceremony where the seniors gave us our own lanterns that symbolized the passing of knowledge from one class to another. Bryn Mawr’s known for her traditions and we were really fortunate to be able to participate in one of the most iconic ones. On top of traditions, the architecture of the school’s super insta-worthy; My friends and I definitely did not miss out on countless of opportunities to take super step photos, regardless of the season change. Being at Bryn Mawr also allowed me to take classes from two other liberal arts colleges, Haverford and Swarthmore.

As a WKW kid, my two favourite classes were Acting 1 and Intro to Documentary and Film where I learnt…….well it’s pretty self-explanatory by the name of the classes so, I shall not elaborate, haha. However, I do appreciate the smaller class sizes and passionate professors! I had a blast during lessons, and it was a pity I only got closer to my classmates at the end of the semester. To keep in touch, I became more active on snapchat as Americans use Snapchat more than Instagram Stories.I think my American friends think I’m slightly cooler now…I think.

Ahhh, easily one of my top favourite cities in the States during my exchange in Philadelphia. Perfect for nature and city lovers! I don’t have a license, so I couldnt go to Yosemite, but I still managed to make the best out of my trip there, and here are the highlights! My friend and I crossed the famous Golden Gate Bridge on foot. It was a happy mistake. The winds were crazy strong that day and I swear the bridge was swaying, just a little. We almost froze to death and celebrated when we reached the end. However, we did not make any plans as to how we should return. Lucky for us, there was a couple who was having trouble taking a nice shot of themselves and the bridge. I offered to help and email them the photo of them and in return, they offered to drive us back, across the bridge! So yay to not freezing to death. Speaking of freezing to death, we took a trip to Land’s End to try to walk off the milkshakes we indulged in…over the course of a few days. Leaning against the pacific ocean, the area had no escape from the strong winds that blew in our direction. It had a beautiful view, and I highly recommend visiting close to sunset to get the awesome blue hues I got in my photos. The hike was pretty manageable; Just pack some snacks, water, and load yourself a good playlist to sing to along the way! Another must visit in SF – Fisherman’s Wharf. Clam chowder was fab, but tbh, if you get the chance to go to Boston, which I did, go to Quincy Market, the clam chowder there is a lot better! Fisherman’s Wharf was filled with buskers, food, and just a lot of good vibes. There’s also this retro arcade that you MUST check out. Lastly, my FAVOURITE PLACE in SF, Alcatraz. Being a history junkie who loves ruins and old things (old men not included, sorry), Alcatraz was AMAZING. Alcatraz has America’s oldest lighthouse and was home to many of America’s badest criminals. Filled with stories, the place is definitely going to leave you with goosebumps and deep in thought about life and all things deep. I highly recommend paying for the audio tour to really immerse yourself in the exhibition. Also, we had to wake up at 5 am to leave the apartment at 6 am to get last minute ferry tickets to the island. Do not do that. It is very cold, and a long, painful wait. Instead, book the tickets online at least a month in advance! Learn from our mistakes.

I’m sure the photos speak for themselves about the amazing views and vibes from the city. But sadly, 10 photos isnt enough to do the beautiful place justice. It’s a small city that’s pretty easy to cover. However, it’s filled with history, and the architecture just really has their own character which transports you to some corner in Europe as you walk through them. Things I would recommend to do there – get a picnic mat, find a nice green spot, sit yourself down, (optional: with a book) and chill.
Alternatively, if you are a Korean drama fan, you can also follow the trail of Asians who are probably hunting for the filming locations of Goblin. No additional maps If you like food, if you like classic architecture, if you like standup comedy, Chicago is for you! From deep dish pizza, to endless of comedy clubs to choose from, you can also enjoy the breathtaking skyline from Chicago 360. Chicago is the perfect example of timeless architecture. It’s also known as the ‘windy city’ so I would advise against going there in the Winter. The strong winds will carry you back to the state you originally came from, so don’t try! Check out Old City for a quaint little district filled with bars, music, and great vibes. Overall, if you have to choose only a handful of cities to visit in the States, I’d put Chicago amongst my top 3!

If you like old, cold and the remains of a fascinating and successful industrialisation, Pittsburgh is the place for you! Not a lot of people would consider visiting Pittsburgh when they are in the East Coast, but it is as cold as my heart so I enjoyed it tremendously. Just kidding.

But truthfully, Pittsburgh was one of the highlights of my trip and here’s why – Bridges. If you love bridges and would like to spend the day hunting them down and basking in the glory of architectural success and amazing design, Pittsburgh has the most number of bridges in the world. Small ones, big ones, for people, for cars, for scooters, for your dog. You name it, Pittsburgh has it! If you don’t get art, Pittsburgh is for you. Home to the Andy Warhoal museum, the King of Pop Art, his art is so mainstream, common folk like I can get it and appreciate it. The museum is really well organised and easy to follow through. Everything is super pretty and relatable; everyone likes Campbell soup, right? (Google: Campbell Andy Warhoal and you’ll get what I mean) After going through the whole museum, you’ll find yourself in awe of artists and of Andy Warhoal himself. You might even feel inspired. I did.

Lastly, go to Mount Washington for a killer view of the city and its bridges. If you’re going to Pittsburgh in late-November like I did, bring some firewood, fire starters, and dry straw to keep yourself warm, (jk pls don’t get into trouble, but do dress warmly) just in case you want to catch the fireworks from the top of the mountain and have to end up waiting in the cold for almost 2 full hours. I didn’t, and it was horrible. The fireworks and view were worth it, though.

Broadway! Hell yeah. One of the best things about being in NY is having the skyscrapers tower over you, getting pushed around in the subway, and Broadway! I gave my life savings to Broadway, but I have zero regrets. It was a dream come true to see magic happen on stage and I would live it again and again. I’m a city girl through and through and New York is definitely my favourite city.

Being on an exchange in Philadelphia really opens your mins up to the endless if possibilities in the world, and it has truly been a privilege for me to have gone through this 5 months in a foreign country. It was a journey of self-discovery, and I’m proud to say that I’m going home a stronger, more independent and open-minded person.